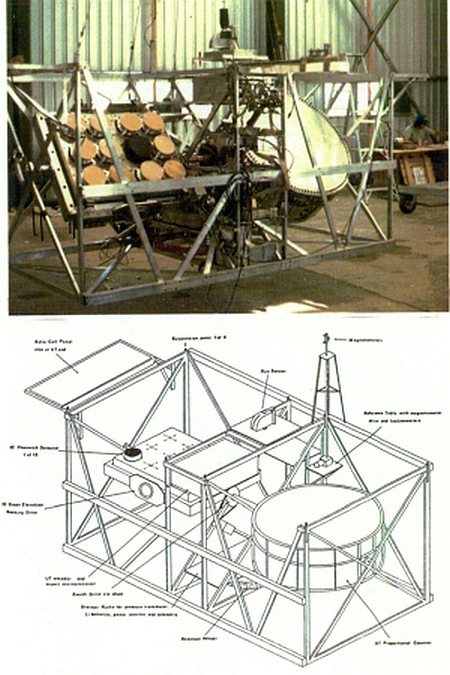 In this flight were transported two instruments: a large area phoswich array provided by the Imperial College Group and a large area proportional counter developed by the University of Tasmania. The goal of the flight was to investigate hard cosmic X-ray sources from the southern hemisphere.

The large area phoswich array consisted of 12 identical modules totalling 1600 cm2. Each module had a primary 2 mm thick NaI crystal backed by a 14 mm thick CsI crystal, and a 2° FWHM field of view produced by a tantalum honeycomb collimator; passive shielding was used to block background radiation through the sides. Photons were detected in 31 energy channels over the range 16-200 keV.

The other instrument was a multilayer, multianode proportional counter with an area of 5200 cm2 and 21 cm active depth, filled with Xenon at 1 atmosphere. Its 10-100 keV range was spanned by 20 energy channels. A thin alloy honeycomb collimator defined the 2° FWHM field of view, while the rear and sides were screened by a graded shield. Background due to charged particles was also removed by active screening.

The balloon was launched from the INPE base in Cachoeira Paulista, Brazil at 6:40 UTC on 26th March 1983. It remained at a float attitude, corresponding to a vertical atmospheric absorption of 4.1 g/cm2 between 11:20 utc and 17:00 utc. The flight ended with a balloon failure at float altitude. Apparently the balloon burst and became entangled with the parachute, and as a result the payload was completely destroyed upon impact.