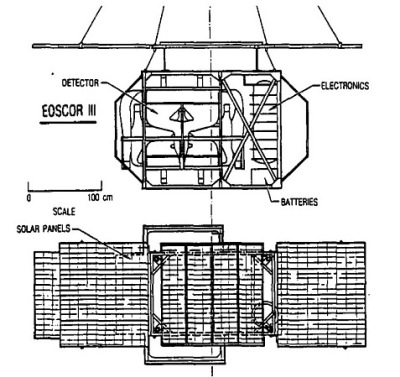 EOSCOR was the acronym of Extended Observation of Solar Cosmic Radiation, a balloon-borne detector for measuring solar flare neutrons in the energy range 20 to 150 MeV. The instrument was designed at the Case Western Reserve University during late 1970's decade to take advantage of several long durations balloon flight systems under development at the time. This particular flight exploited a then novel concept developed by Vincent Lally at the National Center for Atmospheric Research known as RACOON that used conventional zero pressure balloons for long duration flights. The idea was that such a balloon could descend to a stable float altitude after sunset, without any ballast drop, and then return to its original float altitude after sunrise. Because the magnitude of the day-night altitude excursion is primarily determined by the difference in the infra-red radiation environments experienced by the balloon, Lally has christened this the RACOON (RAdiation Controlled ballOON) technique.

In the scheme at left we can see the distribution of the different components in the gondola (click to more detailed views of the detector itself).

EOSCOR was composed by two scintillators separated by a 1 meter time-of-flight (TOF) path. Neutrons incident on the detector produced protons via scatterings and interactions in the upper scintillator. TOF is then used to discriminate the slower moving proton recoils from the copious relativistic Compton electrons generated by the atmospheric and cosmic gamma-radiation. Complete protection against data contamination by charged particle induced events is provided by veto counters placed above the upper scintillator and below the lower scintillator. The energy loss in the upper scintillator and the proton's velocity (as determined from the TOF measurement) were combined to give the energy of the proton recoil. Solar neutron events were then characterized by an increase in the neutron counting rate over the atmospheric background, correlated in time with a flare. Since the gondola orientation and the position of the sun were known, the incident neutron energy could be determined from the measured proton energy by simple scattering kinematics.

Data was processed on an event by event basis by an on-board microcomputer based on an M6800 microprocessor. The microcomputer also performed a high degree of data compression which was necessary to maximize the use of the low data rate telemetry transmission through the GOES and METEOSAT satellites.

Power for the system was provided by silicad batteries, kept continuously charged during the day by an array of solar panels. The average power consumption of the detector and associated electronics was 80 Watts. As the EOSCOR detector was meant to operate during the day, no power was needed at night except to provide 3 Watts of "stay alive" power for the microcomputer program memory and occasionally to power internal heaters whenever the payload passed over a particularly cold cloud deck.

In order to switch on the system at sunrise a black-ball radiometer was used. When the temperature exceeded 0°C as measured by the radiometer, a "turn-on" logic unit switched on the microcomputer. 140 minutes later, when the sun was high enough to start the observational run the unit turned on the detector electronics. Two radiometers were actually flown in order to prevent a systems shutdown due to balloon shadowing and, even though convective shields were fitted to each, both were mounted on booms extending outwards from the gondola in order to alleviate the effects of boundary layer air flow from the balloon.

The solar panels used in EOSCOR were Solarvolt high density solar modules, custom built with a light weight plastic coating. Each panel was bonded to a light weight aluminum tray with thermal epoxy and the trays riveted together to form the array illustrated in the scheme above left. The electronics required nine panels while the remaining four were allocated to the NSBF telemetry package. The underside of the array was painted white to prevent excessive solar heating. 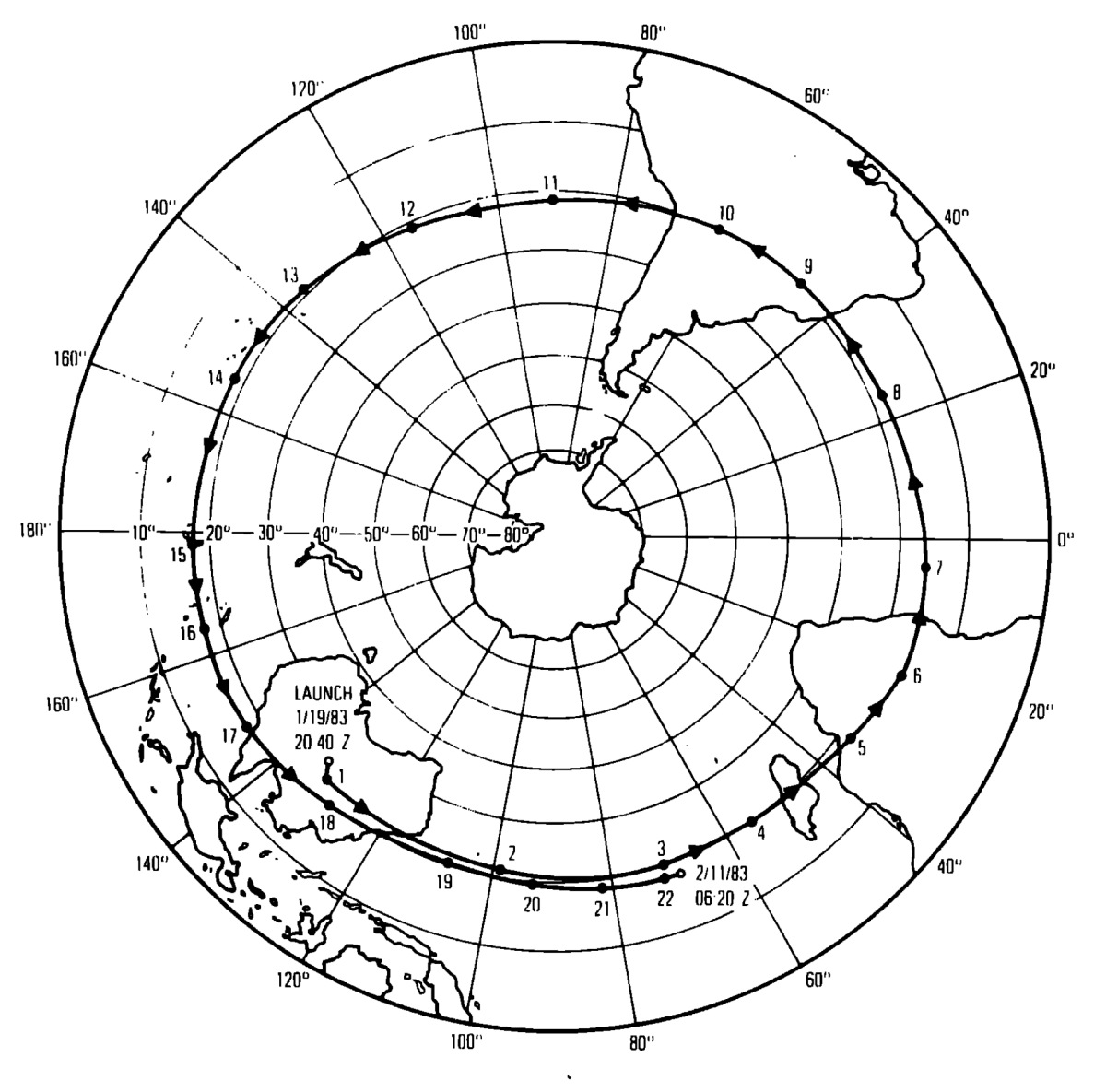 EOSCOR III was launched at 20:40 UTC on January 19, 1983 on a 440.000 m3 zero pressure polyethylene balloon. The flight was scheduled to take advantage of the zonal winds which are characteristically uniform, both in bearing and velocity, during the three summer months at mid-latitudes. The balloon drifted westwards at about 1200 nautical miles per day and remained within latitudes of +7 -0 degrees of the launch site. The flight trajectory is shown above.

Processed data were telemetered to the ground through the METEOSAT and GOES satellites and the position of the balloon continuously monitored by the ARGOS satellites. The night altitudes remained nearly constant throughout the flight, except when passing over a very cold cloud deck near Tahiti. The day altitude, however, gradually decreased to about 34 km one day before termination. After circumnavigating the globe, an attempt was made to terminate the flight as it passed over Australia. The initial attempts to do so failed and termination was not achieved until it was out over the Indian Ocean were the mission was succesfully terminated on February 11 at 6:20 utc. Payload descended into the ocean and sunk.