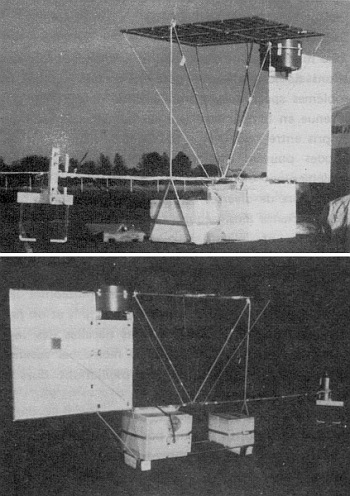 The objective of the flight was to study stratospheric gravity waves during a long duration balloon mission. The payload, composed by two scientific gondolas suspended at different levels in the flight train, were developed by the Laboratoire de Météorologie Dynamique (LMD) of the Centre National de la Recherche Scientifique (CNRS) while the balloon used for the mission, an Infrared Montgolfier was provided and operated by the Centre National d'Etudes Spatiales (CNES).

As the properties and propagation of gravity waves are strongly influenced by the vertical temperature and horizontal velocity gradients of the medium in which they propagate, to measure these gradients, two gondolas were suspended under the balloon, at 100 m and 300 m respectively. Each one carried a pressure sensor, a temperature sensor, two sonic anemometers (one measuring the vertical relative wind, the other the horizontal relative wind), and two magnetometers used to determine the absolute direction of the measured horizontal wind. The different devices and instruments were mounted on an aluminum frame welded, which also carried a fin that allowed to orient each gondola in the direcion of the wind. The anemometers and the temperature sensor were placed at the end of a horizontal arm pointing upstream of the flow. The support frame measured 2.50 m long and 1.40 m wide high.

In the images at left we can see pictures of the two gondolas that formed the flight train (click to enlarge). Picture up: on the right, the fin (on the non-visible side of which are mounted the two magnetometers). In the middle, at the top of the metal frame, the panels of solar cells. At the bottom of the frame, the two boxes of polystyrene containing respectively the electronics and the pressure sensor (left), and the energy block (right). On the left, carried by the arm, the temperature sensor (suspended at the end of the arm) and the two sonic anemometers (horizontal and vertical). Picture down: on the left, the fin in the middle of which are placed the two magnetometers. In the middle, at the bottom of the metal frame, the two boxes made of polystyrene which respectively contain the energy block (left), and electronics (right). The second box also contained the pressure sensor.

The on-board electronics based on a microprocessor board, managed the instrumental measurements, made calculations of the horizontal wind components relative to a landmark linked to the Earth, calculated the temporal average of the different quantities measured and finally stored and transmitted the processed data using the ARGOS system to NOAA satellites. A circularly polarized antenna, shaped like a Archimedean spiral, was used for data transmission.

The energy supply to each nacelle was provided by a battery of cadmium-nickel recharged by solar cells. It was protected inside a set of polystyrene nesting boxes, separated by mylar sheets, which prevented the temperature from drop below -40°C. The solar cells were gathered in 4 panels 54 x 45 cm, each consisting of 5 rows of six 76 mm diameter cells.

The balloon was launched from the grounds of the Satellite Tracking Station of CNES in Paardefontein, near Pretoria on December 5, 1982. However, the balloon burst after reaching float altitude. As a result of the incident, the two payloads were destroyed on impact.