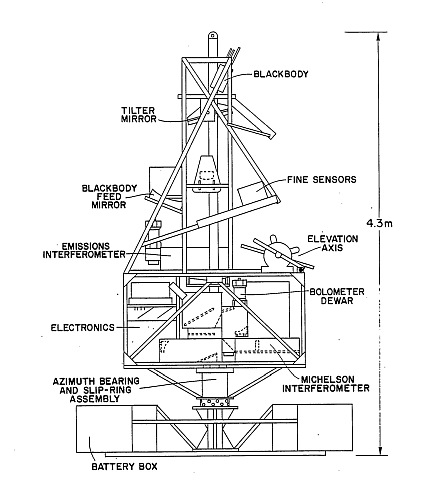 The primary purpose of the flight was to obtain a calibrated high-resolution far infrared spectrum of the Sun using a balloon-borne solar telescope equipped with a high resolution Michelson interferometer. The experiment -based on a previous design- was designed and constructed at the University of Calgary.

The payload is shown in a schematic diagram in the figure at left and in a photograph at right (click to enlarge). The structure consisted basically of two components: a main base, which contained batteries and a telemetry package for balloon and parachute commands, and a rotating platform which was oriented toward the Sun,and which contained the bulk of the scientific instrumentation and main telemetry package. The two segments were connected by means of a bearing assembly, which housed the main azimuth torque motor and contained a slip-ring assembly which transmited power from the batteries to the instrumentation. Since the main base provided the inertia against which the upper platform was rotated, the batteries were located as far from the central axis as possible. Coupling to the parachute train and balloon was through a central shaft which was rigidly attached to the base.

The entire upper platform was oriented toward the Sun in azimuth, while a servo-controlled elevation mirror directed solar radiation up to a tiltable plane mirror. This radiation was then reflected to a Cassegrain optical system and, following the primary focus, was collimated before passing into the Michelson interferometer. A final set of optics produced an image onto the liquid helium cooled bolometer detector. The upper platform also carried a blackbody calibration source, and its associated optics, a four-position filter wheel, and a chopper to provide an alternating signal which was used for initial tests of alignment and steering during the flight. A second Michelson interferometer and detector system viewing horizontally in the anti-solar direction, with independent power and electronics, was used to obtain atmospheric emission spectra complementary to the absorption data present in the solar spectra.

Total weight of the instrument was near 1000 kg.

The balloon was launched from the Canadian Space Research Facility in Gimli, Manitoba on August 28, 1982, at 11:09 utc. It ascended at approximately 275 meters per minute reaching a float altitude of 34.9 km. The servo system was activated at an altitude of 17.2 km during ascent and, despite rather severe buffeting, achieved lock onto the Sun. This stable condition was maintained throughout the flight. After float altitude was reached, the optimization of the telescope and steering axis alignment was performed and the main data collection commenced. Useful data were recorded from initial axis alignment until sunset, over a period of approximately 13.5 hours.

The balloon remained aloft throughout the night, to aid in termination and subsequent recovery, and was cut down at 12:30 utc on August 29, 1982. The payload impact occurred near the city of Brandon, Manitoba, Canada, and the equipment sustained only relatively minor damage.