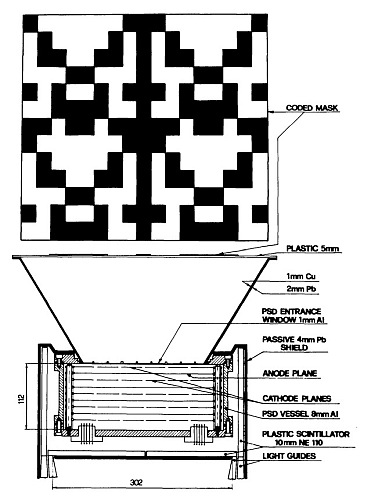 The TXC (Transient X-ray Camera) was a balloon-borne Coded Mask Telescope built at the Istituto di Astrofisica Spaziale, Frascati in cooperation with the Istituto di Fisica di Bari, both from Italy. The prototype was aimed to obtain measurements of the hard X-ray radiation in the energy range of 20-150 KeV.

The TXC telescope consisted of a coded mask and a Xenon filled position sensitive multiwire proportional chamber. The figure at left shows a drawing of the TXC telescope and the pattern of the mask used (click for more details). The basic array of the mask pattern, based on Cyclic Difference Sets of Hadamard type consisted of NxM =7X9 opaque and transparent elements and had an area equal to the position sensitive detectors (PSD) entrance window area. The whole mask pattern was obtained repeating the basic array twice minus one line and one column, so that the overall mask area was about 4 times the detector area. The mask consisted of 97,2 mm thick, Pb pieces glued on a 5 mm thick plastic support and held at 240 mm over the PSD window. The elements were rectangles with dimensions 28 x 22 mm, about twice the PSD spatial resolution (FWHM).

The PSD entrance window was a 468 cm2 1 mm thick Aluminum foil, supported by a light Al alloy structure. The PSD vessel was an A1 alloy box 27.1 x 27.1 x 11 cm3, 8mm thick. The sensitive volume of the chamber was divided into 4 regions by means of 5 cathode planes alternated to 4 anode planes with a 11 mm gap; wires in each anode plane were 5.5 mm spaced while cathode wires were 2 mm spaced. The PSD was surrounded by 10 mm NE110 plastic scintillator active shields and by 4 mm passive Pb shields. The four anode planes and the scintillators were operated in anticoincidence.

During the flight the whole instrument was packed inside a thermal insulating foamed polystyrene blanket. The telescope, weighing 415 kg, was placed at one side of the gondola to avoid shading from the mechanical suspensions. The telescope pointed at the zenith and was free to spin. As azimuthal orientation was not controlled it was continuously measured at 1 degree by two magnetometers for post-flight aspect reconstruction. For each event, three parameters were measured: namely the amplitude of the energy signal from the anodes, and the amplitudes of the X, Y coordinate signals from the cathodes. The identification code of the activated plane was also telemetered.

The balloon was launched from the C.N.R. Stratospheric Balloon Facility at Trapani, Sicily on August 6, 1981 at 6:30 UTC. It reached an altitude of 40 km and flew for more than 23 hours to land 60 km north of Sevilla, Spain