Developed by Institute of Space and Astronautical Science (ISAS) 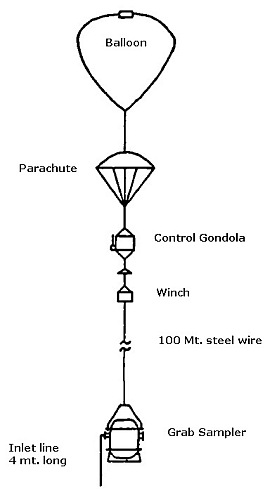 The balloon sampler was composed by four major blocks as can be seen in the image at left (click to enlarge): six sampling cylinders, eight motor driven valves, control and monitor circuits, and a pressurized vessel. Particular consideration was paid to the problem of contamination of the samples so strict requirements were placed on the choice of materials and components, construction methods, cleaning techniques, vacuum integrity, and sampling procedures. In order to avoid contamination by halocarbons from the components (cylinder, valve, manifold, etc.), all parts were cleaned thoroughly before they were assembled. The inside of the electropolished sample-cylinder was further passivated by silanization with hexamethyldisilazane, and then evacuated for several hours at 150 °C.

The cylindrical aluminium pressurized vessel measured 0.9 m in diameter, 1.3 m in height, with a weight of 150 kg. It contained the six 30-1 sample cylinders together with the sampling manifold, a monitor circuit, and a valve-controller. A motor-driven stainless-steel bellows valve was installed between each sample cylinder and the sampling manifold; it was operated at the desired altitude by command signal from the ground station. The sampling manifold was connected to an outside air-intake tube 4 meters long flexible equipped with a glass-sealed end for ensuring a high vacuum and extremely clean conditions at launch.

Once the balloon reached float altitude, the scientific gondola was reeled down by a winch with a stainless steel wire to 100 m below the balloon and control gondola, in order to avoid contamination from these systems and from the helium gas to be released from the balloon. Then, the end glass-seal was cut off and the 4-meter intake tubing was extended downward. The air sampling operation was executed while the balloon was in a slow telecommanded descent phase (1 or 2 meters per second) from the ceiling altitude to the minimum sampling altitude of about 20 kilometers, allowing the inlet port being continuously flushed with ambient air. A telecommand from the ground station initiated each sampling procedure at a predetermined altitude. The opening of the appropriate valve, waiting for some time, and closing it were executed automatically by the on-board microprocessor-based controller. Once the balloon flight ended, the sampler detached from the balloon and descended under his own parachute where a final tropospheric sampling was performed. The sampler was recovered within an hour of the impact in the sea surface.

Starting in 1985, the grab sampler was replaced by a more sofisticated cryogenic unit which allowed to obtain larger samples of air.