Developed by University of Florence 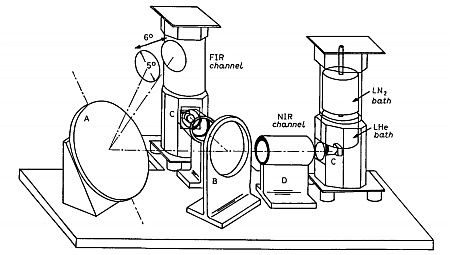 The objective of the flight was to perform a survey of far infra-red galactic dust emission in the wave-length region of (150~400) and (350~3000) micrometers, at angular scales larger than six degrees. The instrument on board was a balloon-borne two-channel differential photometer denominated ULISSE. At left we can see an scheme of the optical lay-out of the instrument (click to enlarge) where A was the 25 cm diameter wobbling mirror which performed a 6 degrees spatial modulation in a direction parallel to the horizon in order to avoid atmospheric offset. B is the metallic mesh arrangement of 180 lines per inch used to split the beam and to focus on the detectors by two TPX lenses, which defined a field of view 5 degrees wide (HPBW). C are the liquid-helium dewars containing the detectors which were composite bolometers cooled to 1.6 K with their Winston cones. Finally D are the antidiffraction ensembles containing the TPX lenses.

The high-frequency channel (NIR) was matched to dust emission, being centred at 150 µm; the low-frequency channel (FIR) was sensitive at wavelengths greater than 350 µm. In this way the experiment was sensitive to both dust and CBR emission. All these elements were shielded using Eccosorb panels and housed in a rectangular gondola as we can see in the images at right.

During the flight the instrument scanned the sky at constant elevation, following the random rotation of the balloon, measured by a magnetometer. Data were transmitted (analogically) to ground, recorded on analog tapes, and printed on strip-chart recorders for later analysis.

The balloon was launched by dynamic method from Trapani-Milo launch station in Sicily, Italy at sunrise on July 19, 1980. After performing a transmediterranean flight towards the west at an altitude of 41 kilometers it landed in southern Spain 20 hours later. This was the first time that a balloon measuring 800.000 m3 was launched in Europe