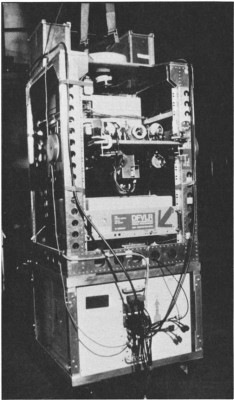 The primary objective of this flight was to measure trace gas profiles in the stratosphere and to compare the results with simultaneously performed measurements of the LIMS instrument aboard the NIMBUS 7 satellite.

For this purpose, a balloon gondola was designed and built to provide a sun pointing capability. The gondola carried three radiometers measuring the gases H2O, HNO3 and NO2 in occultation during sunset. The gondola provided two axis stabilization to better than 3 arc mins by means of a twin axis sun sensor controlling an experiment mounting plate in elevation and the complete gondola in azimuth.

This was the first scientific flight of the instrument. The ascent of the balloon took its normal course, and the float altitude (38.4 km) was reached in about 2 hours. Until about noon the payload was in very good condition. Later the instruments and the mounting plate heated up to temperatures higher than 40ºC affecting the responsivity of the detectors. Shortly before sunset an A/D converter was also affected by the rising temperature inside the gondola, which resulted in data having an increased offset. To prevent the instruments heating further, they had to be switched off by telecommand for short periods. From this point on, measurements could only be made for periods of about half a minute every 3 min. Consequently there was a reduction in accuracy of the measurements caused by the described thermal effects.