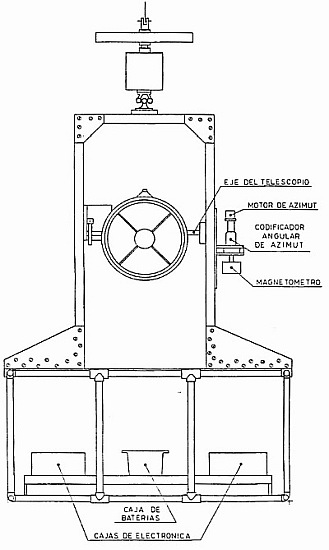 This infrared telescope was developed within the Astronomy in the Far Infrared (ALlR) project, hence its acronym. Its objective was the search and observation of celestial sources that emit in the range of 45-350 µm which is not observable from telescopes installed on land.

The ALIR I basically consisted of a telescope mounted on a stabilized platform, coupled to a bolometric detector and was the first complex development of an instrument for stratospheric balloons carried out entirely by scientists and technicians of the Institute of Astronomy and Space Physics and with the collaboration of other scientific institutions of the Argentine Republic. On the left you can see a diagram of the distribution of its components and a detail of the configuration of the detector (click to enlarge).

It was conformed by a Cassegrain telescope (Dall-Kirkham), with a primary mirror 30 cm in diameter, built in aluminum with a nickel layer, which had a field of view of 12 minutes of arc. The secondary mirror, also made of aluminum, was oscillating, with an amplitude of between 12 and 24 minutes of arc, modifiable by remote control. Both mirrors were built with the collaboration of the Astronomical Observatory of the National University of La Plata.

The detector was a Germanium-Gallium bolometer cooled with liquid Helium, mounted in a dewar at a working temperature of 2ºK. It also had three filters, interchangeable by remote control, maintained at the same temperature and which allowed to make photometry in three bands: 45-80 µm, 80-120 µm, and 120-350 µm.

The whole set was mounted on an adjustable gondola. The stabilization in azimuth was achieved thanks to the reference of the horizontal component of the earth's magnetic field, obtained by a magnetometer. The coupling to rotate and orient the platform was provided by the aiming motor reacting against a flywheel located in the upper part of the structure. The magnetometer was operated by means of a stepper motor, operated by remote control. When turning it at a given angle around the vertical axis of the platform, it automatically rotated in space an equal angle but in the opposite direction. This is how the telescope was oriented at the desired azimuthal angle.

To reduce pointing errors during the flight, observations of known infrared sources (Jupiter, Mars, etc.) were made intermittently, which allowed, in the subsequent analysis of the data, to decrease the absolute error up to about 15 arc minutes, as well as they also helped to calibrate the absolute value of the detected flows.

The transmission of the information to the receiving station was done through a PCM system that had a transmission capacity of 1000 bits / second. The transmitted variables were: the output voltage of the bolometer, the angular position of the telescope both in elevation, as in azimuth and azimuth error (which allowed to reconstruct a posteriori, the areas of the sky actually observed), the state of some systems such as filters, amplifier gain, amplitude of oscillation of the secondary mirror, etc. and some internal parameters such as the temperature of different points of the equipment, the battery voltage, etc.

The telecommand system operated at 138 MHz and had a capacity of 15 commands that were activated by the keyboard from the ground station, and were obtained by the combination of 4 basic tones. As pitch encoders and decoders were used tuned relays of high selectivity and stability, which had a latency of the order of 2 seconds.

The energy used by the equipment was provided by three batteries of 12 Volts of Pb-acid, which gave it a flight autonomy of approximately 10 hours. The batteries were located in closed aluminum boxes equipped with a valve that ensured that the internal pressure remained close to normal pressure.