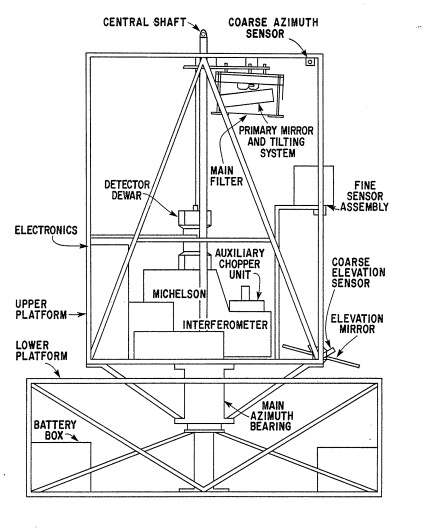 The primary purpose of the flight was to study the far infrared absorption spectrum of the stratosphere using a balloon-borne solar telescope equipped with a high resolution Michelson interferometer. The experiment was designed and constructed at the University of Calgary.

The payload is shown in a schematic diagram in the figure at left and in a photograph at right (click to enlarge). The scientific instrumentation was mounted on the upper platform which was free to rotate in the azimuthal direction defined by the central shaft. The bottom of this shaft was connected to the lower platform via the main azimuth bearing assembly containing the servo-controlled azimuth torque motor. Slip rings in this assembly linked the upper and lower platforms electrically and were used in redundant pairs as a precautionary measure to carry electrical power from the batteries to the instrumentation and electronics. The batteries (lead-acid) were placed in the corners of the lower platform to maximize the reaction torque of the system. The main frame was constructed from 25 mm square-section aluminum tubing with 3 mm walls and the complete gondola (including scientific instrumentation, telemetry equipment and ballast), in flight configuration, weighed approximately 580 kg. The elevation mirror, located at the front of the upper platform, was free to rotate about a horizontal axis and was driven by a servo-controlled torque motor to direct the solar beam up to the primary mirror. The radiation was focussed by this mirror and entered the Michelson interferometer.

There were two independent operating modes. The first was a source measurement mode (where the source can be either the sun or an adjacent part of the sky); with the telescope pointing control locked on to the sun, the elevation mirror directed the radiation from the source up to the primary mirror which redirected this radiation through the interferometer, where it was subsequently processed. The second was a calibration mode in which the primary mirror was tilted to accept radiation from a collimating mirror at whose focus lies a blackbody cone source. The blackbody radiation was thus directed through the interferometer and processed in the same way as the source radiation.

That optical design provided a precise calibration of the system by ensuring that, in both operating modes, the number of reflecting surfaces were the same, and (by maintaining solar lock on during the calibration mode) the thermal environment of the primary filter was constant. 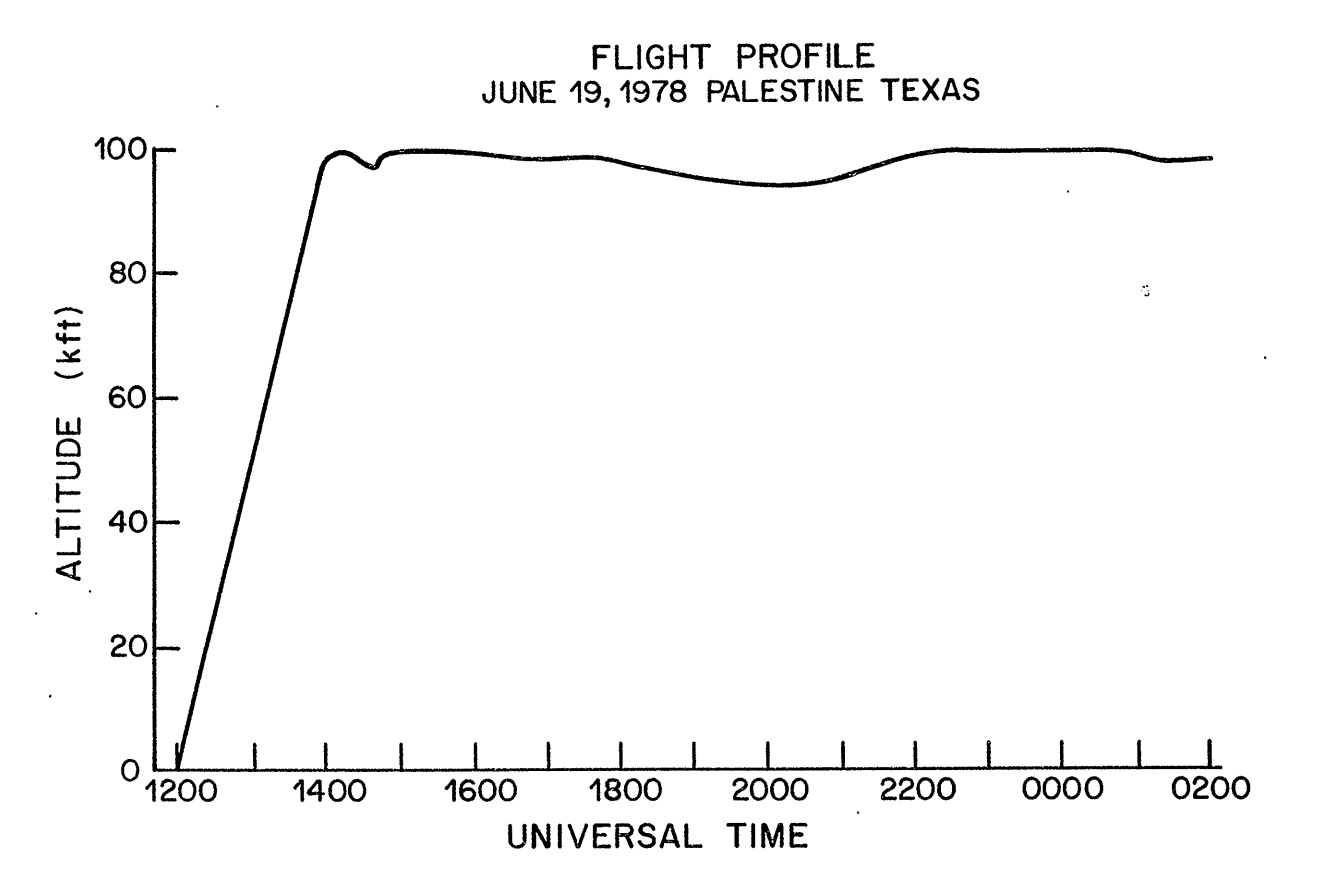 The University of Calgary balloon-borne solar telescope was launched from the National Scientific Balloon Facility base at Palestine, Texas on 19 June 1978 at 12:00 UTC. The ascent rate of the balloon and payload was close to 1,000 ft./minute and the combination reached the float altitude of 99,000 ft. at 14:00 UTC. The flight profile is shown in the figure above. The telescope pointing control was activated by command from the ground at 13:12 UTC at an altitude of 55,000 ft.

After collecting data for about one hour the sun went behind the balloon (16:15 UTC) and as expected the instrument had a two hour dead-time. Since the temperature of the power converter was quite high it was decided to shut down all telescope and interferometer functions during this dead-time (16:30 UTC). Unfortunately, when attempts were made to power up the system after the dead-time was over (19:00 UTC), commands could not be received by the gondola. The balloon was only 104 nautic miles away at that time. Although the actual cause of this problem was not been identified with certainty, it was probably due to a shielding of the command receiver antennae by the gondola. To overcome this problem was used the tracking aircraft and its facility to send commands to the gondola, from the opposite side of the payload.

A telephone "hot-line" was established to an airfield in the vicinity of the balloon and commands were issued over the telephone and then relayed to the aircraft where the pilot completed the loop by sending the commands while flying in the direction of the balloon. At 22:00 UTC commands were reliably getting through to the gondola and the system was activated. However, because of the tenuous nature of the command link it was decided to leave the telescope pointing control in its lowest gain (8 arc minutes in each axis) as a fail safe measure, thus extensive tests of the pointing control were not made.

During the sunset period the detector signal was swamped by an oscillating signal, which was probably due to a resonance in the elevation axis, and it was felt that it would be unwise to attempt adjustments at this time. The flight was terminated at 3:05 UTC and the gondola and parachute reached the ground at 3:47 UTC. Unfortunately the ground winds at the impact site were very high, and, as is often the case with a night landing, the gondola was dragged over rocky terrain and badly damaged.