Balloon launched on 10/5/1978, from Holloman Air Force Base, Alamogordo, New Mexico, US 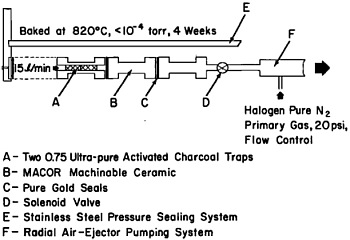 This flight transported an instrument to obtain samples of total halogen in the stratosphere. The core of the payload was a series of six 0.75 g ultrapure activated charcoal traps positioned in line as shown in figure at left. The system was mounted in a 907 kg sampling payload which was launched from Holloman AFB, New Mexico, in October 1978 as part of the ASHCAN program.

Special precautions were taken to preclude any Cl and Br contamination of the samples by the balloon payload. At altitude, unperturbed stratospheric air was drawn through the six charcoal traps under low flowrate conditions. All of the halogenated species were collected on the first trap in every case, with subsequent traps used for verification of a 100% collection efficiency.

After flight, for each sample in the activated charcoal matrix the elemental halogen determination was made by nondestructive neutron activation analysis. The air volume determination was made in two independent ways: mechanically, using a calibrated pumping system, and chemically, by totally trapping CO2 from the sampled air on a molecular sieve, and then determining the CO2 by gas chromatography. The data obtained in this flight was complemented with measurements obtained using a similar system, onboard a NASA WB-57F scientific plane, in six flights performed during 1979 and 1980.