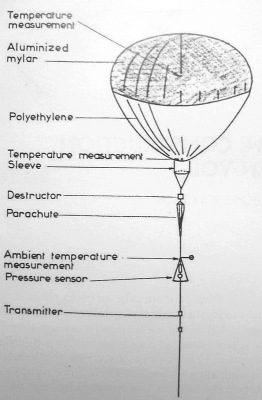 The so called Infrared Montgolfier (MIR) is a balloon developed by the Service d'Aéronomie of the CNRS and CNES in 1977 in an attempt to meet the needs of long-duration flights. The MIR is a hot air balloon "open at the bottom" made of 2 different materials: a top part of aluminized Mylar 12 µm thick making a cavity for absorbing ascendants infrared and block any re-emission toward the sky and the bottom part made of linear polyethylene 15µm thick, an infrared transparent material and tough at cold (-80°C). It only uses helium to gain altitude at takeoff. Their reflective cover provides lift heating the air inside the envelope by the sun during the day or by the infrared radiation coming from the earth during the night. During the day, the MIR flies at an altitude of about 28 km to 32 km while at night it floats between 18 and 22 km depending on the infrared flux radiating from the overflown area and the temperature of the air parcel. It could carry a scientific payload of about 50 kg.

At left we can see an scheme of the flight train of the first test flights of the MIR (click to enlarge). The balloon had a volume of 5.800 cubic meters and was composed by a top part of 12 micron polyester film (Mylar) absorbent in the infrared, aluminized on its outer face and for the bottom a 15-micron transparent polyethylene film. The shape chosen was the same used on open stratospheric balloons, the so called ''natural shape" that resembled an inverted teardrop. An opening stiffened by a fiberglass hoop was installed at the neck of the balloon to let the air in. The thickness of the films was standard to avoid any problems of supply and manufacturing. A band of a special type of ribbon was used to join at the equator of the balloon the different materials of each of the halves.

The payload was composed by sensors to measure internal temperatures inside the balloon, a destruction device, a parachute and sensors of ambient pressure and temperature. A HF transmitter allowed to transmit these parameters back to the ground and also the current position of the balloon. For this tests a conventional zero pressure balloon acted as tow balloon carrying the MIR to an altitude of 5.000 meters on which it inflated itself ingesting atmospheric air and then started to flight on its own.

This was intended to be the first flight test of the balloon. The first MIR of 5.800 m3 of volume and with a total mass of 37 kg was manufactured in September 1977, and was attempted to be launched in from the CNES balloon base of Aire-sur-l'Adour on October 14, 1977.

It was succesfully launched using a helium carrier balloon to cross the first 5000 m before being separated. Launch and initial ascent went flawless. The MIR ingested atmospheric air well and inflated itself as expected. But after separation from the tow balloon the balloon capsized. The failure was due to the fact that the weight of the tiny gondola under it was too low compared to that of the balloon's envelope. After collapzing, the MIR emptied through its lower orifice and fell. A simple bag of sand would have avoided the failure. A new attempt would be performed with success on December 19, 1977