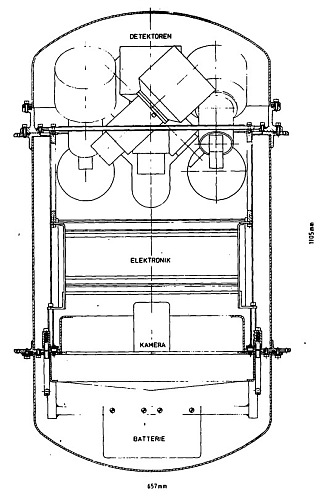 The objective of the flight was to detect gamma-ray bursts during a long duration transatlantic flight. The project was a cooperative effort between the Max Planck Institute from Garching, Germany and the Enrico Fermi Institute of the University of Chicago. Balloon launch and operations were under responsability of the National Scientific Balloon Facility from the US.

The instrument (which we can see in the scheme at left) consisted of two counter assemblies: (a) five Nal(Tl) scintillators, each 100 cm2 in area and 0.5 cm thick, which provided a measurement of the energy spectrum over the range 15-200 keV, and at the same time gave information on the arrival direction of the burst and (b) a large CsI(Tl) scintillator of 1300 cm2 area and 1.85 cm thickness that was used to measure the gamma-ray spectrum over the range 200 keV to 2 MeV. No directional information was obtained from this scintillator.

The assembly (a), the electronics circuitry, and the readout systems were built at the Max Planck Institute, Garching, Germany while the (b) counter was provided by the University of Chicago.

Directional information was obtained with counter assembly (a) in the following way: The five Nal scintillators were mounted such that the central detector was pointing toward the zenith, the four others being inclined by 45° to the vertical direction and rotated by 90° each in the azimuthal direction. All the housings of the photomultiplier tubes were shielded against photons from
the rear by a graded shield. The detectors were totally absorbing for X-rays below 100 keV, and the measured rate of a photon burst was proportional to the area of each detector, projected with respect to the direction of incidence. The ratios of the count rates in the different detectors thus gave a measure for the direction of incidence of the burst.

Multilevel discriminators were used on each scintillator in order to measure the count rates over several energy intervals. In the ''quiescent mode" the count rates were continuously read-out and stored on photographic film with a time resolution of 6 s. Whenever the count rate below 60 keV increased significantly above the quiescent rate, a faster readout with a time resolution of 0.5 s became active ''burst mode". During flight, the azimuthal orientation of the instrument was determined with Sun sensors and magnetometers while the position of the balloon was measured by the Omega navigational system.

The detectors, electronics, camera system and batteries were housed in a pressurized cilyndrical gondola.

The instrument was launched from an old WWII airport located near Trapani, Sicily, on August 13 for a transatlantic balloon flight to the United States. After a flight of 4 days and 11 hours, over the Mediterranean and then crossing of the Atlantic the payload was recovered near Gardner, Massachusetts, USA. A fire destroyed the payloads, recorded data and truck during the return of the equipment from the recovery operation to Palestine for shipment to Europe.

During this flight two major bursts of energetic photons have been recorded: one solar x-ray flare in coincidence with a type III radio burst and a strong gamma-ray burst on 1976 August 16. This burst was recorded by the instrument and was also seen by several spacecraft (Vela, Soltad, IMP7, OSO 8). The burst became noticeable (i.e., exceeded the quiescent count rate) at 16:15:28 UT. A main burst of about 8 seconds duration was observed, and was followed, about 25 seconds later, by a less intense second burst.