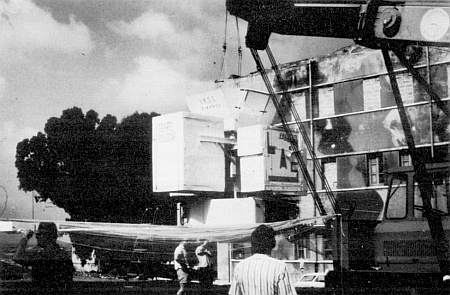 HRX-76 acronym of Hard X-Rays 1976 was the first transatlantic mission performed using a multi-instrumented gondola with several experiments in the domain of Hard X-Rays, Gamma rays, Infrared Astronomy and biology aported by Italian Universities and Research Institutes exclusively. In the image at left and right we can see images of the gondola before flight.

The main experiment onboard was developed by Laboratorio di Tecnologie e Studio delle Radiazioni Extraterrestri in Bologna. It was composed by two identical and independent hard X-ray detectors allocated with their axes of view directed along the vertical. Each detector was made up of a cylindrical NaI(Tl) crystal 20 cm in diameter and 1.27 cm thick, optically coupled through three light pipes to three photomultipliers. Semiactive collimation, obtained by Pb shields surrounded by anticoincidence plastics cintillators gave a triangular field of view of 14 degreees FWHM. The effective area of the full system was 525 square centimeters while the nominal energy range was between 20 and 300 keV with a poor resolution due to non uniformity in light collection. The telemetry bit rate was 96 bit/sec. Counts from each detector were continuously and separately transmitted in two energy channels (20~150 and 150~300 keV) with a time resolution of 0.83 s. Sixty-channel pulse height spectra from both detectors were telemetered in alternative sequence every 106.6 seconds. With the same time resolution overflow (> 300 keV) and anticoincidence plastic scintillator counts were also continuously transmitted. Atmospheric pressure and data from omega system were also continuously transmitted, together with other housekeeping data.

Another experiment which was also onboard was developed by the Laboratorio di Astrofisica Spaziale, Frascati. It comprised a large-area spectroscopic proportional chamber of 800 cm2 filled with high-pressure xenon (at 4 atmospheres) with C02 quenching which was sensitive to hard X-rays in the energy range 25-190 keV. The total sensitive volume of the chamber (30 x 30 x 10.5 cm3) was divided by grounded wires and planes into 15 independent cells, arranged in three planes, with five anodes each. Charge collected from a single anode was independently preamplified and amplified, then was anticoincided to reject pulses due to charged particles and high-energy, and finally pulse-shape analyzed. Signals were processed into 15 energy channels and counting rates were transmitted through the HF link. A square cells collimator limited the field of view to 14° FWHM. A quite complete triangular response in the range of the experiment was achieved by employing a sandwich structure made of a lead layer 300 microns thick between two copper strips 100 microns thick, employed to trap lead fluorescence.

Additional experiments were also provided by IROE-CNR (Florence), IFCAI-CNR (Palermo) plus a few small piggy-back instruments. All these experiences were mounted in a unstabilized gondola which along the flight service module and ballast needed for the oceanic traverse had a total weight at launch of 1.500 kg.

The balloon was launched by dynamic method from the balloon launch base of Trapani-Milo, in Sicily, Italy at 19:30 utc on July 29, 1976. After a nominal ascent the balloon reached a float altitude of 4.5 mbar. The entire flight had an estimated duration of 5 days. Unfortunately the on-board navigation system failed soon after the launch, and the path of the balloon was reconstructed with suitable accuracy only during the first day by radar positioning from Sardinia. The following 2 days the longitude of the balloon was monitored through sunsets and sunrises as seen from the on-board Sun sensor. Althought the original plan was to travel to a site in the United States crossing the Mediterranean and the Atlantic Ocean, after the third day contact with the balloon was lost and payload was never recovered.