This was the inaugural flight of the so called Transatlantic Balloon Facility, an idea born in 1974, to perform long duration balloon flights from Europe to the United States. The succesful flight marked the first controlled zero-pressure high-altitude balloon flight carrying scientific instruments performed across the Atlantic Ocean, with recovery of the instrument package at the end of the flight.

The main payload onboard was a heavy particle emulsion experiment developed by Bristol University. The stack modules consisted of sheets of Lexan interleaved with thin sheets of steel degrader. Each module contained two 200 microns Ilford G-5 emulsion layers. The experiment was one of a continuing series, designed to detect and identify within 1 or 2 units of charge heavy nuclei in the cosmic radiation, particularly those with charge Z > 50.

This kind of experiment was especially appropriate for this first Transatlantic Facility Flight in that it was inert, and could be prepared at short notice. As an additional payload was included a small gamma ray burst experiment developed by the University of Southampton. Total payload weight was 1800 kg. The balloon carried 750 kg of ballast to maintain the level flight after the gas cooling at night or when it crossed over banks of cold clouds at night. Tracking was done using the OMEGA system which performed good except for some gaps in the middle of the Ocean. Total flight time was near 84 hours. Above can be seen the path and the altitude profile of the flight. 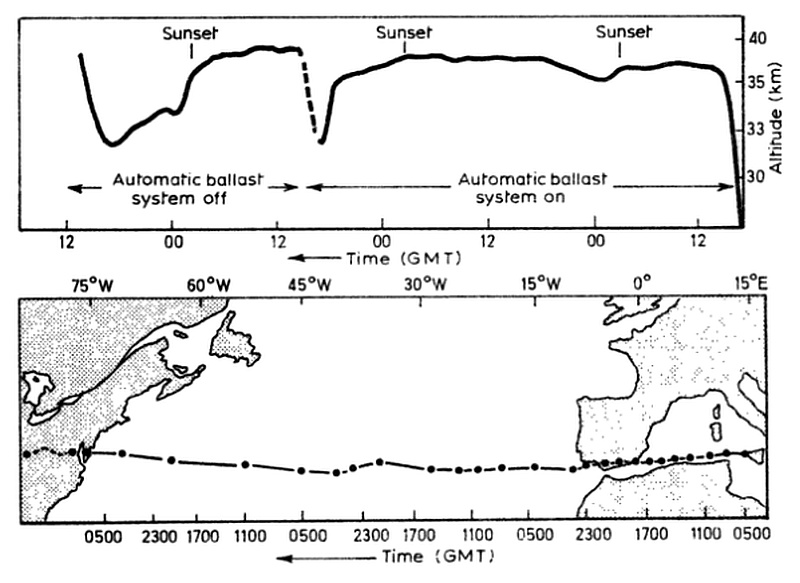 The balloon was launched on 5th August and the automatic ballast system maintained the balloon's altitude very satisfactorily until the ballast supply was exhausted. The on-board radio navigation system located the balloon with very good precision at all times during the flight. Commands were reliably communicated to the payload throughout the flight and data were recovered for almost all of the 80 hour period that the balloon was at float altitude. The flight was terminated soon after crossing the eastern coast of the United States.

The flight was successful, and the package was recovered in good order and returned to Bristol for processing. After scanning the emulsion layers 52 tracks of incidents particles were found in the emulsion block. Detailed analysis of the tracks in the plastic layers, and calibration of the detector, were carried out that same year. The yield of particles was less than previously observed in flights from Sioux Falls, partly because of the shorter exposure, bearing in mind time spent at low altitude due to insufficient ballasting, and more significantly the lower geomagnetic latitude for the first part of the exposure.