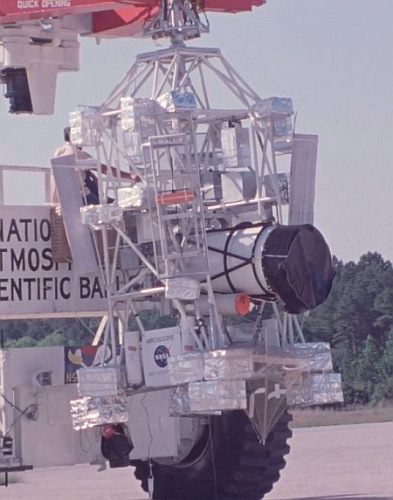 AIROscope (Ames Infrared Observatory telescope) was a balloon-borne telescope designed for astronomical observations at infrared wavelengths. The system was originally developed in late 60's at the University of Arizona for operation in the ultraviolet (known at the time as POLARIscope) and then transferred to NASA Ames where undergone extensive modification and adaptation to operate in the IR domain. It was flown several times by AMES until 1975 when resulted extensively damaged at landing after a balloon failure. At left we can see an image of the telescope ready to flight during a mission (click for a detailed view).

The AIROscope telescope had an Dall-Kirkham configuration with an elliptical primary and a spherical secondary. This arrangement permited to select focal ratios to match different requirements by choosing from a group of inexpensive spherical secondary mirrors. The primary mirror was 71 cm in diameter but was slightly underfilled by the 13-cm diameter secondary. An aperture at the detector limited the field-of-view to 5 minutes of arc. Source modulation at 11 and 21 Hz was produced by oscillating the secondary mirror in a spatial chopping mode often used in infrared astronomy. Each beam position was 3.5 minutes off the optical axis. Thus, the movement of the secondary caused the telescope to first look at the object in the right beam and then to look at the background sky symmetrically to the other side of the optical axis. A photomultiplier tube behind a multi-density target at the telescope focal plane provided information for fine collimation and focusing which was done by commanded adjustments of the secondary mirror. Axial movement permited refocus of the telescope at float when the structure cooled off, shortening the distance between the primary and secondary. All of this structure was out of the field-of-view of the detector. The secondary mirror assembly was installed on a spider structure made of roll-flattened aluminum tubing, which gave a superior rigidity and a small cross section to the light beam. All material exposed was gold plated. The telescope had available a volume of about 0.25 m3 at the Cassegrain focus for scientific instrumentation, but limited to a maximum weight of 40 kg to avoid affecting the stabilization of the system.

Initial orientation of the system was accomplished using compass heading information telemetered from the gondola to the ground. Two compasses were onboard for redundancy that used fluxgate magnetometer sensors and generated second harmonics as a cosine function of the azimuth angle and the earth's magnetic field. For initial acquisition of the observational targets and offset tracking AIROscope used a television system of high sensitivity fully controllable by command from the ground station. A star tracker was present as a backup to the main TV-system. Light entered the star tracker through a small Cassegrain telescope with a 20 cm f/15 primary. The slightly defocused image of about 2 mm diameter was centered on a pyramid beam splitter which was viewed by four photomultiplier tubes. The tracker acquired and locked on a star down to about fifth magnitude.

The AIROscope gondola was fabricated of thin wall aluminum tubing and weighed about 70 kg. The gondola was suspended from the servo-driven azimuth drive. By torquing against the parachute shrouds, the gondola turned and acted as the outer gimbal. The inner gimbal rotated about a horizontal axis within the outer gimbal and furnished elevation angular movement. Suspended inside the inner gimbal was the telescope, pivoted to rotate about an axis perpendicular to the axis of the inner gimbal. For balance and minimum deflection, these gimbals were each driven by two torque motors. The inner gimbal, telescope, star tracker, television and detectors weighed approximately 160 kg. Other weights associated with AIROscope included electronic packages, about 120 kg, the batteries, about 100 kg and about 300 kg of miscellaneous hardware and ballast making the total launch weight of about 800 kg. The AIROscope gondola was constructed so as to absorb a maximum amount of shock and damage while providing protection to the experiment, telescope and gimbal system. The crash pads utilized by the AIROscope were aluminum honeycomb instead cardboard due to the fact that these materials generated less moisture contamination at altitude.

The primary ground control station was housed in a van which was configured internally to support and transport the complete AIROscope system. The rear portion of the van provided ample work area once the gondola and antenna were removed at the launch site. An Air-Ride suspension system was used to further protect the rack-mounted electronic equipment during transit. The ground station displayed all scientific, engineering and status information during the flights and recorded the command and telemetry digital bit stream for detailed analysis. Commands were transmitted to the AIROscope on a frequency of 405.4 MHz while the telemetry system operated on 1483.5 MHz. Both systems had a power output of approximately 10 watts.