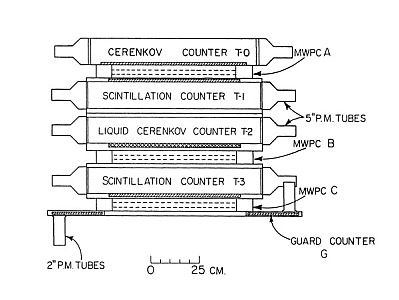 The instrument used in this experiment was a combination of two scintillation counters, two cerenkov counters, and a multiwire proportional counter hodoscope. The figure at left shows a cross section of the detector system.

The two Cerenkov counters combined provided a continous and overlapping velocity measurement for particles from 400 to about 2500 MeV/nucleon. Each of the counters were enclosed in a white light integration box to gain uniformity of signals over the entire counter area. An annular scintillator, surrounded the bottom of the detector stack and served to reject side showers.

The multiwire proportional counter hodoscope consisted of three chambers, designated MWPC A, B, and C in the scheme, each with wire grids in the x and y directions. The hodoscope determined the trajectory of the particle and also defined the geometrical factor of the instrument. It served to correct the pulse heights from the counters for angle of incidence and for small, residual non uniformities