Balloon launched on 8/12/1975, from Langmuir Laboratory for Atmospheric Research, New Mexico, US 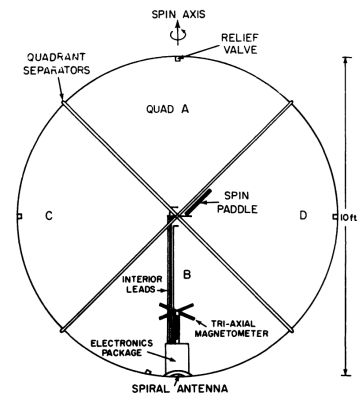 The Balloon Electric Field Sensor, or BEFS, was designed to measure a full profile of the vector electric field, from the ground through the top of a cloud. It consisted of a superpressure spherical balloon, with a conductive metal coating on the outer surface, and the associated electronics package which was mounted inside the balloon. The metallized surface of the balloon was divided into four conducting regions that were electrically isolated from one another on the balloon surface (see figure at left). Two of these lunal regions were symmetric about the vertical spin axis while the other two were symmetric about the horizontal axis. These conducting quadrants served as the sensing elements of the instrument: when the balloon was exposed to an electric field, charge was induced on these conducting surfaces. As the balloon changed its orientation with respect to this field, the induced surface charge was redistributed. A resulting induction current was measured as it passed through the wires connecting each symmetric lunar pair with electrometer circuits. Since the orientation of the balloon could be determined from on-board sensors, this induction current could be used to calculate the external vector electric field.

The balloon, manufactured by Schjeldahl using mylar, was ten feet in diameter, and displaced 524 cubic feet, allowing a five pound payload to be taken to 32,000 feet. A total of four relief valves were mounted on the balloon. These were necessary in order to allow for sufficient out-gassing during flight. The valves were set to maintain a positive pressure differential of 40 millibars inside the balloon. The measured currents as well as housekeeping data from a pressure sensor, magnetometers, and thermistors were fed to a multiplexer, sampled, and then fed through a sample/hold amplifier to a twelve bit analog-to-digital converter. The digitized data was sent to the ground using a 1680 khz transmitter and a surface mounted, cavity backed, spiral antenna.

The magnetometers were used for the determination of the balloon orientation. The pressure gauge measured the atmospheric pressure inside the thunderstorm or, if radar tracking failed, served as an altitude indicator. The external thermometer measured the temperature profile of the thunderstorm, while the internal thermometer supplied housekeeping information. Because of its metallic coating, the balloon was easily tracked by radar or using a standard meteorological rawinsonde receiver. Thus, not only could the BEFS experiment measure the vector electric field within a thunderstorm, but it could also supply information on the storm's temperature, pressure, and wind structure.

This flight was the first one to be performed inside a thunderstorm. The balloon was launched at 11:32 mst on August 16, 1975 and rising at approximately five meters per second, it reached its maximum altitude of 7.3 km msl at 11:52. This apogee was well under the predicted maximum of 8.5 km. Introduction of air during the inflation process and the subsequent loss of free lift accounted for the reduced ceiling. The balloon was tracked by radar during its entire flight. Independent tracking was also provided by the combination of a GMD-1 tracking receiver and the on-board pressure gauge. During the flight the physical and electrical properties of the storm were well documented. Cameras from distant locations photographed the storm's movement and its physical development.