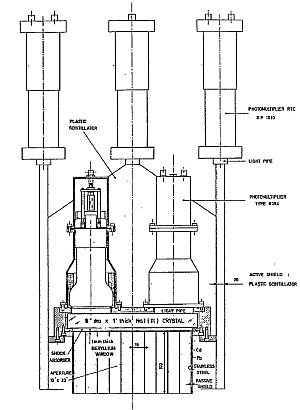 The payload was composed by a balloon borne X-ray telescope (scheme at right). The objective of the flight was to search for pulsation of the X-ray source HER-X1

The detector consisted of a 229 mm diameter NaI(Tl) crystal, 25 mm thick, covered by a beryllium window 1 mm thick. A passive collimator (Pb, Cd) gived to the telescope a field of view of 10º in the NS direction, and 8º in the EW direction at full width half medium (FWHM). The telescope was surrounded by an active guard of plastic scintillators viewed by four photomultiplier tubes, the outputs of which were electronically connected in anticoincidence with the central detector's output. A passive shield (Fe, Cd, Pb) reduced the background due to neutron activations. The energy resolution (FWHM) of the NaI detector was 25% at 59.5 keV

The pulse given by the crystal (corresponding to the photon energy loss) which satisfied the conditions imposed by the event selection logic, was amplified, shaped, and sent into a 128 channel Analog-Digital Converter.

The gondola consisted of a duralumin cubic frame, 120 cm on a side, where the spectrometer, electronics, stabilization telemetry and telecommand were attached. The entire system weighted 200 kg.

Two sensors were mounted on board indicating the residual atmospheric pressure during the ascent of the balloon with a precision of ± 2 mb and the pressure at the floating altitude with a precision of 0.1 mb. Azimuth stabilization locked the payload with respect to the Earth magnetic field by mean of a magnetometer which drived the suspension bearing. The accuracy was ± 0.5 degree. Corrections were performed at frequent intervals according to the local magnetic declination along the balloon trajectory. Moreover the angle between the payload and the magnetic North could be modified by the rotation of the magnetometer operated by telecommand.

Information was sent to the ground via a FM/FM telemetry using 8 IRIG standard channels. Telecommand allowed the transmission to the gondola of 9 different orders. A housekeeping analog multiplexer allowed to transmit at regular intervals of 30 seconds, the housekeeping parameters: low voltage monitoring, attitude parameters, temperature of electronics , test of telecommand orders concerning the speed and the direction of the rotation of the spectrometer.

Finally, in an effort to better determine the energy of any spectral features observed during the flight, a X-ray calibration source was flown onboard. Upon radio command a radioactive source composed by 10 micro-curies of Americium-241, was removed from its 5 mm-thick lead, container for about 1 minute.

The observations were conducted on May 14 and 15, 1975 (Julian Day 2442547). After launched, the balloon reached its ceiling altitude at 23.43 UTC and remained at atmospheric depths between 2.4 and 2.7 mb until the moment on which the flight was command terminated at 05.16 UTC.