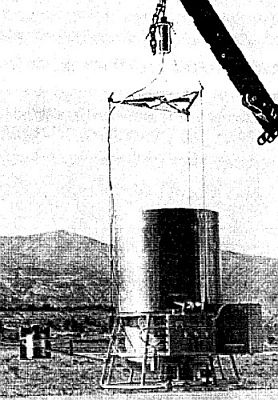 The objective of the flight was to study the tropical nightglow emissions in the vicinity of the Brazilian magnetic anomaly, using a stratospheric balloon carrying a photometric gondola constructed in collaboration between the Institut d'Aeronomie Spatiale de Belgique and the Institut d'Astrophysique de Paris.

In the image at left we can see the balloon gondola before flight (click to enlarge).

The payload was composed by a classical filter turret photometer. The photometer field of view was rectangular, it was 3 arc degrees in the vertical plane and 6 arc degrees in the horizontal plane; it rotated around a vertical axis and scanned the horizon in 1 minute. A wheel holding ten interferential filters rotated with the same speed. The sequence of measurements consisted of ten horizon scans (one per filter), 1 minute for dark current measurements and 1 minute for internal calibration. Consequently, the horizon was observed during 1 min for a given line with a periodicity of 12 min. The detector used was an EMI 9659 B photomultiplier.

The turret was under thermostatic control while the trialcaline photomultiplier was cooled by the ambient environment. The photometric signal was recorded on the ground by FM/PM telemetry with three different amplification levels, together with a number of thermal and electrical control data. The attitude was measured by two magnetometers along the X and Y axes and verified by star crossings. Such crossings provided a check that any pendular movements under the balloon were well within the vertical angular resolution.

In order to retain the full spatial resolution of the instrument, the signal was integrated over each 3º azimuth interval.

The balloon was launched from Sao Jose dos Campos, Brazil on February 26, 1973. After a nominal ascent it floated at 38 kilometers of altitude from February 27th at 00:30 utc to 3:55 utc drifting at 11O km/hr towards the East-NorthEast. The distance to the magnetic equator was 13.1° and 10.4° at the beginning and end of the ceiling, respectively. The flight was entirely nocturnal. Payload was recovered in Martinópolis, Sao Paulo state.