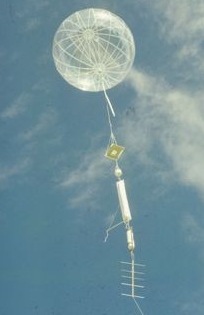 These were the first boundary layer balloons used by French researchers. They were designed to fly at an altitude of 1000 m (900 hPa) had a diameter of 2 meters, and were manufactured by Zodiac using Terphane (Mylar) with a tickness of 80 microns. This allowed a superpressure near 100 hPa at flight level, so if the balloon was overloaded by rain and fell to sea level it remained slightly-pressurized to better withstand the wind gusts.

The flight train was located below the balloon and was 15 meters long. At train's lower end was located the UHF antenna, and above it was a tube containing an altimeter, a magnetometer, and an electronic temperature sensor followed by a second tube containing the telemetry transmitter. It emmited in Morse code the data collected by the sensors, on the 15 MHz band. From both sides two pieces of electrical cable with a length of 5 meters conformed a dipole antenna for the transmiter. Finally, near the balloon envelope was located a box containing the pressure sensor and the solar cell panel. The power was supplied by these cells except during some night flights for which an additional lithium battery package was incorporated.

The total mass of the entire assembly was about 6 kg and due to the long train it required no less than six people to be launched.

The campaign was carried out in August 1973 on the island of Rangiroa in the Tuamotu Archipelago in French Polynesia. A total of 30 gondolas were manufactured by the LMD for this technological campaign.

The results of this first campaign were not good, with must balloons failing during the first two days aloft. The most important difficulties encountered were that in tropical areas due to the low-level flight level the heavy rain showers overload the balloon envelope and force it down to the sea. Another problem was the loss of buoyancy during the night caused by condensation of dew on the balloon skin. The need to overcome these factors led to a breakthrough concept that would mark future designs: to protect the instruments, the entire flight train and sensors would be located inside the envelope of the balloon thus rendering immune to damage by immersion.