Balloon launched on 6/6/1973, from Holloman Air Force Base, Alamogordo, New Mexico, US 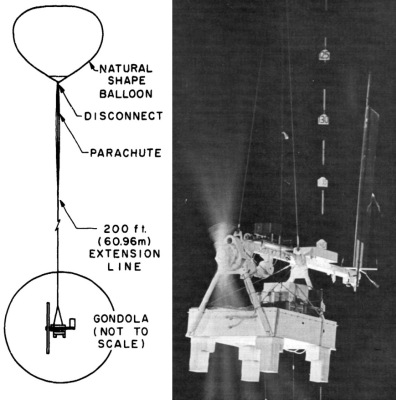 Requirements were to provide enough-thrust to overcome the drag force (108 lb.) on the balloon in a 15-knot wind at 60,000 ft. To generate this thrust, an FH1100 helicopter rotor was selected from among commercially available propellers. This two-bladed rotor had a diameter of 35.4 ft, a chord of 10.22 in., blade twist of 0.571 degrees/feet and blade tip angle of 12 degrees. An output of 196 rpm, was required to obtain the predicted thrust at altitude. That was achieved using a Lear-Siegler starter generator motor and a gear reduction unit with a ratio of 17.28 to 1. At this gear reduction, the motor must run at 3.387 rpm. The motor power requirements where 35.2 volts and 220 amperes which were provided by silver-zinc rechargeable batteries: a bank of 368 Electric Storage Battery 2-1000 cells for propulsion, and 30 Yardney BB 405 cells for housekeeping functions and system electronics.

The directional control was supplied by a rudder measuring 8.75-ft high, with a surface of 21.9 square feet. It was placed 11.5 feet to the rear of the propeller. The rudder could be rotated 25 degrees from neutral position by autopilot, or manually from a ground-based radio command system.

The basic structure of the gondola that housed the propulsion system consisted of an aluminum sandwich platform, a horizontal tubular support assembly, and vertical triangular strut assemblies which interconnected the horizontal tube and platform. The powerplant, speed reduction unit and the propeller were mounted on the support assembly.

The batteries for electrical power were set in one tier on the platform assembly. The rudder for directional control of the gondola was pivoted to an extension boom from the support assembly. The gondola was suspended 300 ft below the balloon on a 293-lb (100-ft dia) parachute system which was flown fully extended and unopened. Four crushable aluminum honeycomb blocks located below the platform helped to absorb the impact of the landing.

An horizontal positioning mechanism for the propeller was incorporated into the design to protect it after the mission was completed. An electrically actuated pyrotechnic pin puller was also provided to hold the propeller horizontally during ground launch. An airspeed measuring device was mounted on the lower side of the aft boom. It consisted of a cup anemometer which was attached to 50-foot of nylon stored on a small reel and electrical cord. A ratchet type mechanism controled the speed of lowering the anemometer after an electrically actuated pyrotechnic pin puller released the ratchet.

In addition to the propulsion system, the gondola load included instrumentation for command, control, and telemetry and 600 lb of ballast. The total weight of the flight system including the balloon was about 4.600 lb.

The balloon for the POBAL mission was specially manufactured following AFCRL specifications, by G.T. Schjeldahl Co. using 0.5 mil Mylar with woven Dacron reinforcing fibers. It was a natural-shape single-cell balloon with a volume of 670.400 cubic feet capable of carrying about 3500 pounds of scientific and control instruments to an altitude of 60.000 feet. It was composed of 83 gores of 173 feet and had a weight of 700 lbs. It counted with two inflation tubes 150 feet long, an helium valve at the apex and 2 venting tubes each 25 ft2 x 105 feet long.

The second demonstration flight of the POBAL system was performed from Holloman AFB on 6 June 1973. The system was modified to incorporate the recommendations made after the initial flight the year before. However, after less than 1 hour of flight, it had to be terminated prematurely because a socket-to-pin connection in a rudder-control integrated circuit failed, inactivating the rudder servo motor. To complicate matters, analysis of the powered flight runs was made virtually impossible through an administrative mixup which resulted in the loss of digital radar tracking data. Only air­speed was measurable and gondola stability was confirmed. The payload was recovered in good condition.

A third test was scheduled for November 1973 but it was subsequently rescheduled to October 1974 to allow extensive rework of the rudder drive system and some of the electronic components. Apparently it never was carried out.