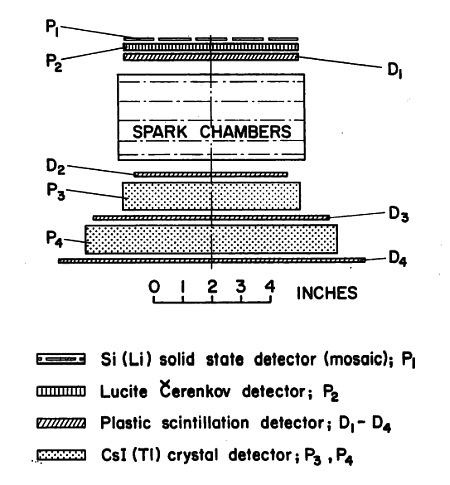 A schematic diagram of the telescope can be seen at left (click to enlarge). The detector P1 was a mosaic of lithium-drifted silicon detectors, each about 1 mm thick. Directly below were a lucite Cerenkov detector, P2 and a plastic scintillation counter, D1.

Each of these detectors was 0.63 cm thick. In the lower part of the apparatus were three 0.32 cm thick plastic scintillation counters, D2, D3 and D4. The plastic scintillation detectors, D1 and D2, defined a geometrical factor of 150 cm2 sr. Between counters D2-D3, and D3-D4, were two 2.5 cm (11.8 g/cm2) thick CsI(Tl) crystal detectors, P3 and P4, which were used to measure the total energies of the charged particles which stoped within the crystals. This arrangement was used to determine the ranges and energies of the stopping charged particles. A four-gap optical spark chamber between detectors D1 and D2 provided information used to make corrections for any dependence of detector response on the trajectories of the detected particles.

The energy losses (dE/dx) in D1 and P1, the Cerenkov radiation produced in P2, and the total energy E deposited in P3 and P4 were pulse-height-analyzed using 1000-channel analyzers. These measurements determined the charges, masses and energies of the isotopes of H, He, Li and Be in the 100 to 300 MeV per nucleon energy interval. These observations could determine the energy spectrum of cosmic ray nuclei from Z = 1 to Z = 14 in the energy range from 100 to 3000 MeV per nucleon.

The instrument was housed in a presurized container and mounted in a large tubular framework which also served to attach balloon control instruments, ballast hoppers and batteries. 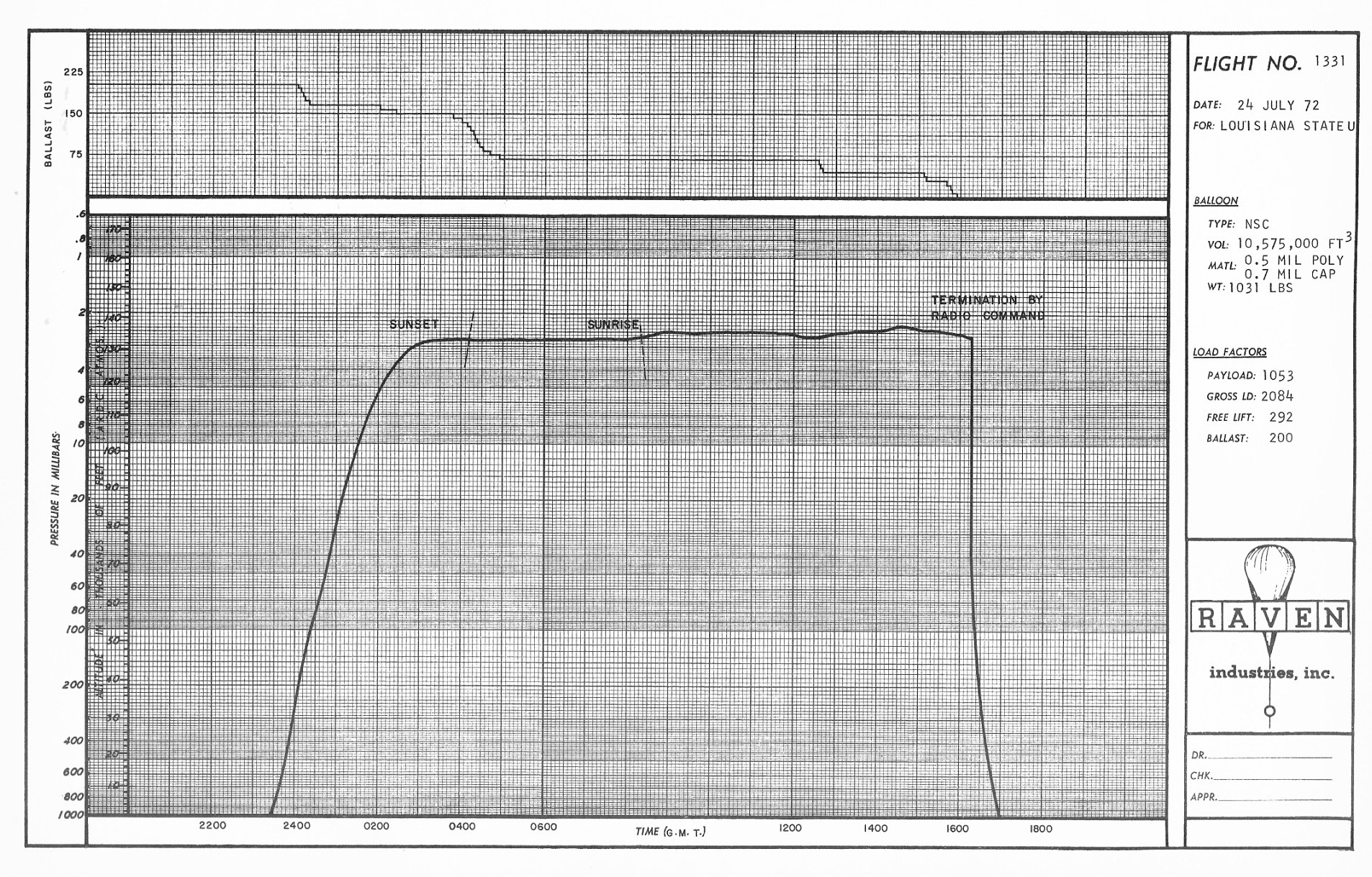 The balloon was launched by dynamic method at 23:27 utc on July 24, 1972 from the airstrip in Fort Churchill airport. Last minute wind shift difficulted and delayed the launch process. After balloon release the horizontal speed exceeded the virtual speed, which required moving the launch truck quickly to impart some load into the lower part of the balloon which was slack and being drug off the ground cloth. The timing was no less than perfect, with the balloon being fully decelerated several seconds before lifting the gondola off the pin.

Taking a southerly trajectory during a normal ascent, the flight managed to reach ceiling without going out over the Hudson bay. The balloon remained at a ceiling of 132,000 feet for just over thirteen hours. It was terminated by the Cessna 206 aircraft and landed 37 minutes later twenty miles southeast of Fort Chipeywan, Alberta.