The large area solid angle double scatter neutron telescope was first conceived in 1968 by the Physics Department and Institute of Geophysics and Planetary Physics of the University of California, Riverside. The objective of the experiment was to measure the flux, energy and direction of albedo neutrons from the earth and to search for solar neutrons.

A schematic cross section of the neutron telescope is shown at left along with a photograph of the assembled detector, showing the location of the anticoincidence sheets and light pipes without the gondola cover (click to enlarge). The aluminum tanks, S1, and S1, were filled with liquid scintillator NE 223 (decaline). The tanks were 100 cm x 50 cm x 15 cm. They were mounted coplanar with a separation of 100 cm center to center. Each tank was optically separated into eight identical cells and each cell was viewed by a 5 inch Amperex XP 1040 photomultiplier tube. For optimum light collection the cell walls were painted white and each photomultiplier tube face was in contact with the liquid scintillator. A reservoir tank with both positive and negative pressure relief valves was attached to each of the main tanks to allow for thermal expansion and contraction of the liquid scintillator.

Extraneous material which might attenuate either the incident or scattered neutrons was avoided wherever possible. The walls of the tanks and the optical dividers were as thin as feasible structurally and the photomultipliers were mounted along two sides of the tanks, rather than on the top or bottom. The thickness of the top and bottom of the tank was 0.32 cm. The resultant dimension of the tank-photomultiplier tube assembly was 102 cm x 110 cm x 16 cm.

The overall dimensions of the detector were limited by the requirements placed on energy response, resolution and efficiency. The efficiency of the detector was determined by the areas and thicknesses of S1 and S2 and the solid angle subtended at one tank by the other. With the additional constraint on up/down symmetry, the optimum detector thickness was about 15 cm for neutron energies between 2 and 100 MeV. If it were thicker, there would be some increase in efficiency but multiple neutron scattering would degrade the angle measurement.

The liquid scintillator tanks were supported at the corners by 2.5 cm square cross section, 6 mm wall thickness chrominum-molybdenum steel tubing. These strong support members were required for the 360 Kg detector to survive the parachute landing following a balloon flight. The tubing penetrated the lower sheet of the top anticoincidence shield (A12) and the top sheet of the bottom anticoincidence shield (A21). It was cut to a "U" cross section where it penetrated the scintillator to reduce the amount of scintillator removal. The frame was attached to the base of the aluminum gondola. The gondola maintained the instrument at atmospheric pressure and near room temperature during a balloon flight. It had a 3.2 mm cylindrical wall and 1.6 mm spherical end caps and was surrounded by 15 cm of expanded polystyrene. 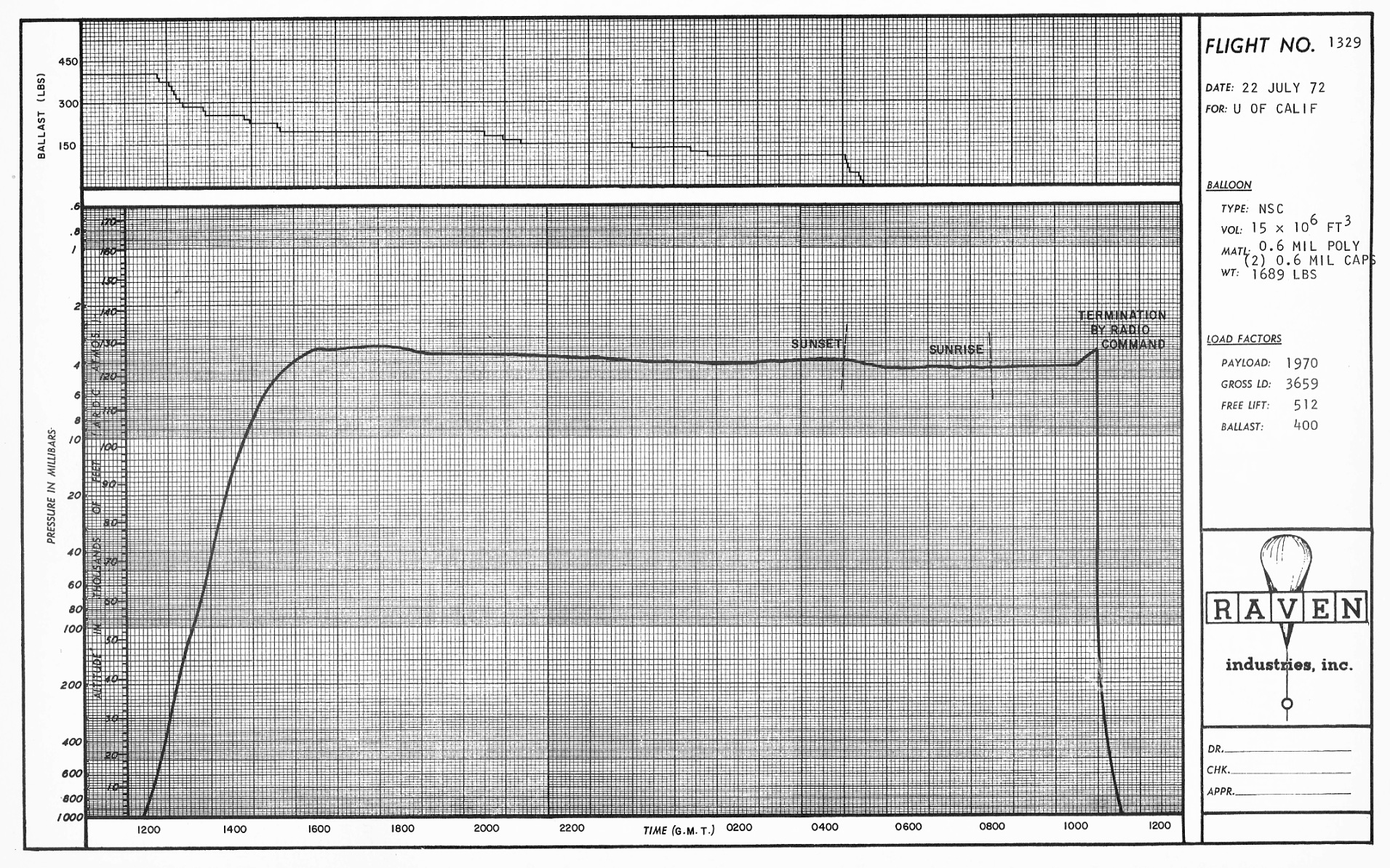 Rigging the experiment with the necessary ballast hoppers and balloon control instrumentation presented a problem. The experiment "looked" up and down and out, with only a 28" space around the center of the gondola, where hoppers and instruments could be placed. An aluminum bracket was fabricated and clamped to the gondola cover with cables and turn buckles. Portions of the bracket were long enough to extend through the 6" thick styrofoam insulation. The control instrument canister was attached with four bolts, becoming a rigid member of the gondola.

Two ballast hoppers, of 250 pound capacity each, were suspended on cables from the main suspension harness. Twelve hundred pound nylon circumferential bands were used to hold the hoppers against the side of the gondola. Cardboard deflectors attached to each hopper allowed expended ballast to clear the shock pad which extended beyond the ballast hoppers. Timers and battery packs were mounted on each hopper. Standard Raven instrumentation was used for the flight, with the addition of a second transmitter to provide scientific data telemetry. Scientific data was recorded at Fort Churchill and at Uranium City.

The balloon was launched from Fort Churchill, at 11:53 utc of 22 July, 1972. Ascent was slower than scheduled, so ballast was expended to increase the rate. After drifting 40 miles east over Hudson Bay, the balloon began its westerly tract reaching ceiling directly over Fort Churchill. The flight was terminated by the Uranium City Center after 19 hours at ceiling. The gondola descended from 126,000 feet in 38 minutes, landing 15 miles southwest of Fort Chipawan, Saskatchewan. Impact was in a marsh too shallow for boats and too deep to wade in.

Since the weight of this experiment exceeded the lifting capability of the helicopter, it was necessary to disassemble the experiment into several pieces which could then be flown out separately. In addition, the assembled gondola was too large to load into the C-47. It could, however, be loaded in pieces. Because of the special recovery considerations, two University of California personnel were scheduled to go on recovery to perform disassembly in the field. Recovery required two days. Two natives with boats and outboard motors towed the package 15 miles to the Fort Chipawan dock where it was hoisted up on land and dismantled into units which could he handled by the crew. After the gondola was recovered and flown to the nearest airport to be loaded in the C-47, it was to be taken to the Pas, Manitoba, to be loaded into the University of California van for its return to the United States. The experiment was taken to Sioux Falls, where a University of California technician performed a complete checkout and found the instrument in perfect working order.