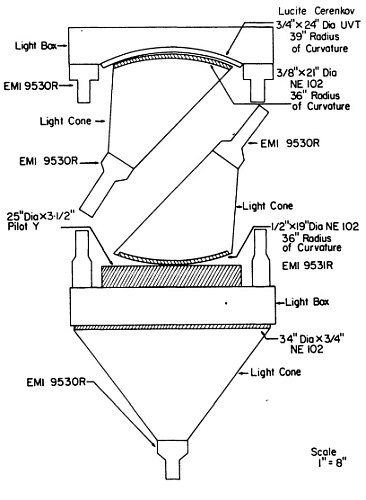 The objective of the flight was to study the isotopic composition of heavy nuclei in the range Z=1-26 using a large cosmic ray telescope that combined several techniques including Cherenkov and total energy counters. The instrument was developed by the Physics Department of the University of New Hampshire.

An outline drawing of the telescope is shown at left (click to enlarge). The telescope consisted of a Cerenkov counter to measure the particle's velocity, two scintillation counters to measure the particle's de/dx, a total energy counter (E), followed by a third scintillator. A comparison of the outputs of the various counters permits the determination of the particle's charge and energy and of its mass as well over the range of energies for which the particles stop in the E detector. The experiment was an evolution of a similar instrument flown in 1970 and 1971 but with the addition of the new total E counter for isotope resolution. The telescope has a geometrical factor of 548 sr cm2. Each of the five elements of the telescope was pulse height analyzed separately using linear 4096 channel analyzers. Scientific data wass telemetered by a separate data link monitored by the personnel from the University of New Hampshire.

The experiment was contained in a cylinder 30 inches in diameter, approximately 7 feet tall, and affixed to a tubular frame which provided attachment points for ballast hopper, control instrumentation, and crush pads. The construction of the frame also provided some degree of shock absorption for landing.

On this particular flight a smaller experiment belonging to Dr. Hugh Anderson of Rice University, Houston, Texas, was flown as a hitchhike. The experiment was enclosed in a 2 x 2 x 3 foot styrofoam box. Objective of the experiment was to measure total cosmic ray ionization rate as a function of local time at floating altitude. Data was telemetered through the Raven data link and recorded on tape.

The flight gondola weighed 912 pounds; 300 pounds of which was expendable ballast contained in two separate hoppers. 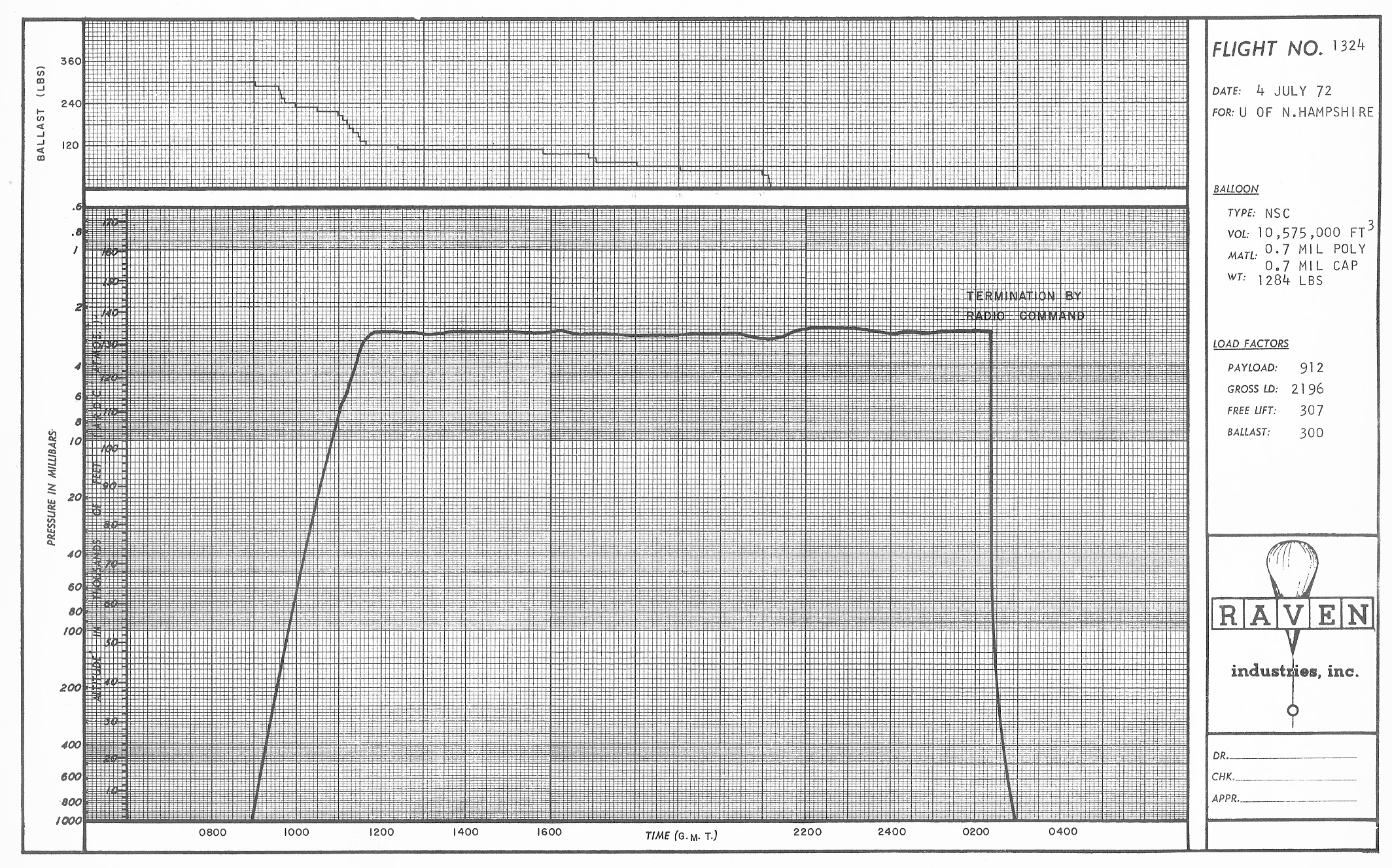 The balloon was launched by dynamic method at 8:56 utc on July 4, 1972 from the airstrip in Fort Churchill airport. Launch was performed smoothly in nine knot surface wind. The balloon ascended at 1000 fpm from launch to 80,000 feet, with several ballast drops near the tropopause. Floating altitude was 137,000 feet. After floating 14 hours and 40 minutes, the flight was terminated from a Cessna 206 float plane, with impact occurring 44 minutes later.

The secondary experiment was damaged at landing.