Balloon launched on 9/19/1972, from Cape Girardeau Municipal Airport, Missouri, US

The large area solid angle double scatter neutron telescope was first conceived in 1968 by the Physics Department and Institute of Geophysics and Planetary Physics of the University of California, Riverside. The objective of the experiment was to measure the flux, energy and direction of albedo neutrons from the earth and to search for solar neutrons.

A schematic cross section of the neutron telescope is shown at left along with a photograph of the assembled detector, showing the location of the anticoincidence sheets and light pipes without the gondola cover (click to enlarge). The aluminum tanks, S1, and S1, were filled with liquid scintillator NE 223 (decaline). The tanks were 100 cm x 50 cm x 15 cm. They were mounted coplanar with a separation of 100 cm center to center. Each tank was optically separated into eight identical cells and each cell was viewed by a 5 inch Amperex XP 1040 photomultiplier tube. For optimum light collection the cell walls were painted white and each photomultiplier tube face was in contact with the liquid scintillator. A reservoir tank with both positive and negative pressure relief valves was attached to each of the main tanks to allow for thermal expansion and contraction of the liquid scintillator.

Extraneous material which might attenuate either the incident or scattered neutrons was avoided wherever possible. The walls of the tanks and the optical dividers were as thin as feasible structurally and the photomultipliers were mounted along two sides of the tanks, rather than on the top or bottom. The thickness of the top and bottom of the tank was 0.32 cm. The resultant dimension of the tank-photomultiplier tube assembly was 102 cm x 110 cm x 16 cm.

The overall dimensions of the detector were limited by the requirements placed on energy response, resolution and efficiency. The efficiency of the detector was determined by the areas and thicknesses of S1 and S2 and the solid angle subtended at one tank by the other. With the additional constraint on up/down symmetry, the optimum detector thickness was about 15 cm for neutron energies between 2 and 100 MeV. If it were thicker, there would be some increase in efficiency but multiple neutron scattering would degrade the angle measurement.

The liquid scintillator tanks were supported at the corners by 2.5 cm square cross section, 6 mm wall thickness chrominum-molybdenum steel tubing. These strong support members were required for the 360 Kg detector to survive the parachute landing following a balloon flight. The tubing penetrated the lower sheet of the top anticoincidence shield (A12) and the top sheet of the bottom anticoincidence shield (A21). It was cut to a "U" cross section where it penetrated the scintillator to reduce the amount of scintillator removal. The frame was attached to the base of the aluminum gondola. The gondola maintained the instrument at atmospheric pressure and near room temperature during a balloon flight. It had a 3.2 mm cylindrical wall and 1.6 mm spherical end caps and was surrounded by 15 cm of expanded polystyrene. 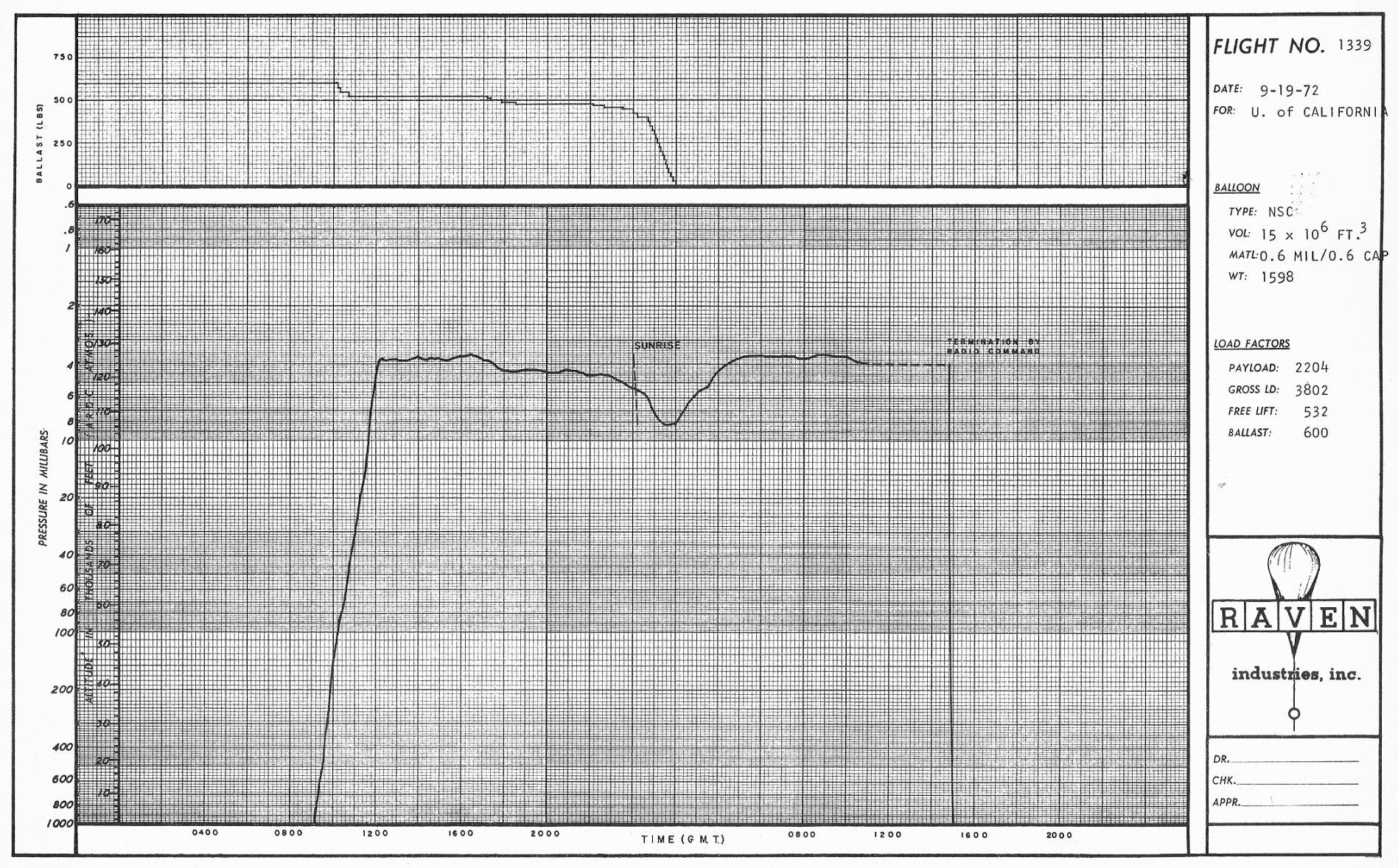 The experiment was basically the same configuration as flown from Fort Churchill, Canada on July 22, 1972. University of California technicians performed a thorough checkout of the experiment prior to final buttoning-up of the gondola. Attaching of the styrofoam insulation jacket had to be completed prior to installation of the ballast hopper and control instruments which were attached outside the jacket. Balloon control instrumentation was similar to the Churchill flight, except that the battery power was increased to provide longer flight duration. The increased battery capacity made it necessary to relocate the transmitter from a location near the bottom of the container to the top of the instrument canister. To accommodate the transmitter in the new position insulation in the top cover was minimized.

The balloon was launched from cape Girardeau Municipal Airport on 19 September, 1972 at 9:12 utc. The flight progressed normally. University of California's data was being received but the signal was noisy, making the data practically useless. A quick survey of the hangar and ramp area traced the problem to a tractor being used on a construction project. The contractor agreed to delay the operation of the tractor for several hours to enable Raven technicians to replace the ignition harness with a new set of carbon core wires. Once done, the noise was eliminated. After 22 hours of flight the receiver in the control package began intermittent operation, and shortly afterward, failed to respond to command tones both for ballast and range. The C-47 enroute to Libral, Kansas was diverted to Dodge City because of weather. The portable telemetry station was set up, but telemetry signal strength was low and noisy. No useful data was obtained.

The following morning the recovery crew contacted the Program Manager who instructed the recovery aircraft crew to locate the balloon, and as soon as it was practical the principal scientist was advised of the decision to terminate the flight. He requested the flight be allowed to continue for as long as possible. The recovery crew had departed and could not be reached. The flight was terminated at 14:48 utc.

The balloon's location was west of a front and was visible through occasional breaks in clouds. The telemetry signal was weak prior to termination and eratic during descent. The tracking aircraft was unable to get a needle indication. The signal was lost after about twelve to fourteen minutes. The balloon was located, but the parachute wasn't located until the following day, when a rancher located the gondola and parachute in his pasture. The parachute had failed to inflate and the experiment free fell. The entire system was damaged beyond salvage. Due to the descent time of approximately fourteen minutes and the erratic signal it is believed the parachute became fouled seconds after termination.