Balloon launched on 8/7/1972, from Centre for Experimentation and Launch of Self-Propelled Rockets, Chamical, Argentine

The detector system was formed by a telescope composed by two Geiger-Muller counters. One of the counters had a thin cover of Aluminium, whereas the second had a internal cover of Bismute. The counting rates of each counter and its double coincidence were transmitted by telemetry.

The solar event of August 7, 1972 was the first case in which secondary X rays resulting from solar X-ray emission have been observed at large atmospheric depths, the duration of the effects being some tens of minutes.

Aditionally the balloon carried on board a Maurer photographic camera loaded with infrared film. During the flight were obtained the first pictures in colour taken from above 20 km of altitude in Argentina.

It was also the first balloon launched entirely by Argentine staff. 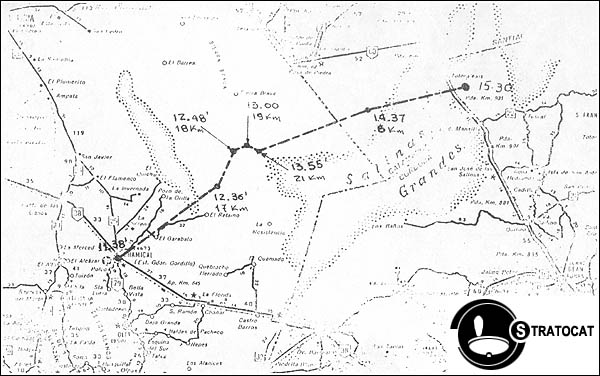 Predetermined cut down by mechanical timer