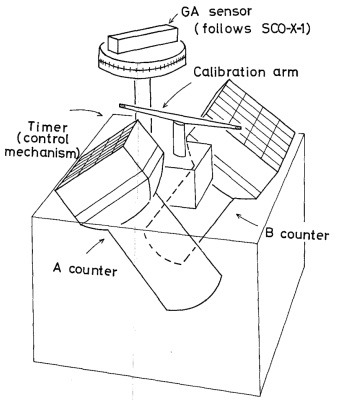 The X-ray detector consisted of a pair of scintillation counters which pointed in opposite azimuthal directions with an elevation angle of 55º, as we can see in the scheme at left. The azimuthal direction of the balloon gondola was controlled in such a way that one of the two counters alternately pointed at Sco X-l, while the other measured the background counts, by means of a servo-controlled line twister. The gondola was rotated by 180º about the vertical axis once every 12 min. A horizontal magnetometer on board was slowly rotated with respect to the gondola frame of reference by a clock so that the azimuth of one of the counter telescopes was kept pointing at the direction of Sco X-1.

A slat collimator composed of tin plates of 1 mm thickness was put on top of the counter. The field of view thus defined was 15.5º (FWHM) in azimuth and 19.5º (FWHM) in elevation. The counter was calibrated in flight using a radioactive source Americium 241 which irradiated the counters once every 12 min during the rotation of the counter system.

The two counters, were operated by a common high voltage supply which was regulated to better than 0.1% under the balloon environment. The coincidences between these counters were rejected as shower events.

The events recorded by the counters were digitized and along with analog data of the onboard magnetometer and barometer were transmitted to the ground with a main carrier wave of 145 MHz.