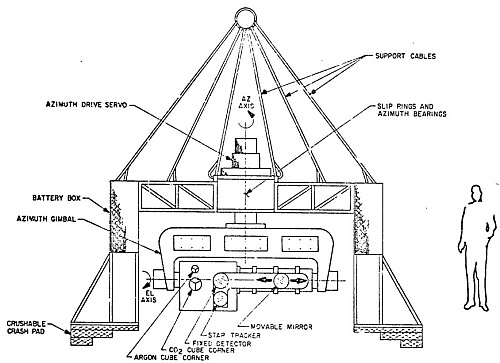 The BAPE experiment were a series of balloon flights aimed to investigate the propagation of laser beams from the ground level to 28 km. A ground-based laser tracking system developed by NASA/GSFC projected Argon and CO2 laser beams toward a balloon-borne optical receiver system.

Separation of the argon and CO2 detectors was varied from 2 to 82 cm. Data from each receiver channel was telemetered to the ground station and recorded. Ambient pressure and temperature, azimuth and elevation bearings, tracking error signals, and other experiment control data were also telemetered to the ground station. The balloon-borne instrumentation and the complete telemetry system was developed by GTE Sylvania.