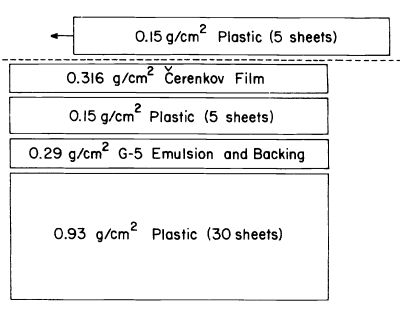 The objective of the flight was to determine both the charge and energy of trans-iron nuclei. An scheme of the detector stack carried by the balloon is shown at left. It consisted of one 200 µm Ilford G-5 emulsion, one fast-film Cerenkov detector, and 40 sheets of plastic. The plastic sheets were predominantly Lexan polycarbonate with a nominal thickness of 250 µm. A few sheets of 200-µm-thick unplasticized cellulose triacetate were also included. The total thickness was 1.7 g/cm2 Lexan equivalent. The detector was arranged in eighty 30 cm x 91 cm modules. Sixty-five of these modules, or a total effective area of 17.8 m2, were studied in this experiment.

Inflation of the balloon began at approximately 18:30 CDT on August 31, 1970 along with a final checkout of the flight electronics. At approximately one-third inflation the balloon was separated from the flight train during an attempt to arm the termination device. The inflation was aborted as the balloon rose up through the launch spool until the lift equaled the balloon bubble weight. The partly inflated balloon was then deflated through the top mounted valves and repacked into its crate. After careful examination, the electronic problem was isolated to a miswired connector in the burst-switch system and corrected by rewiring the connector.

The scientific gondola sustained no damage and it was succesfully launched on September 4th, 1970.