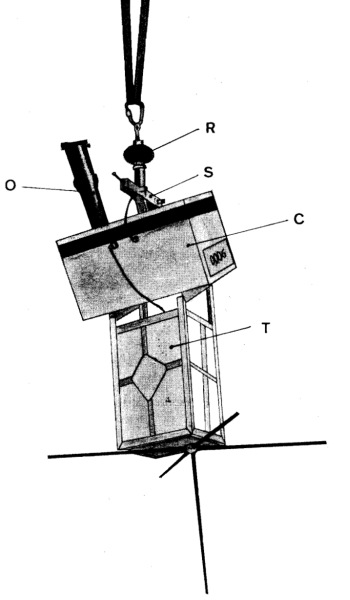 The objective of the flight was to perform photometrical measurements of the twilight sky at a height of 30 km during the period of the Orionides, to study the influence of these meteor shower on the optical properties of the upper atmosphere. This campaign comprised six balloon flights launched from the Aire Sur L'adour base of CNES in consecutive days from October 19 to 26, 1970.

For this purpose throught a cooperative effort between the Institut d'Astrophysique in Paris and the Institut d'Aeronomie Spatiale de Belgique seven photometers identical in optics and electronics were built, to obtain reproducible measurements and photometric comparison without significant risks of systematic errors. The first six were launched in the balloons while the seventh was installed for simultaneous operation during the balloon campaign at the Pic-du-Midi Observatory, in France.

At left we can see an image of one of the photometers (click to enlarge). The assembly was housed in a parallelepiped container (C) that measured 55 X 30 x 29 cm. It was double-walled; between the two were 2.5 cm of polyurethane to ensure a good thermal insulation. On one of the side faces, a closed cover allowed access to timers and switches. On the lower part was attached the telemetry system and antenna (T). The top part covered in aluminum served to mount the optical tube (O) that protruded 30 cm. The suspension arm (S) connected the payload to the rotator. It was made up of a set of squares in duralumin allowing two orthogonal movements in a horizontal plane when balancing the gondola. Finally the rotator (R) was formed by one axis mounted on a ball bearing that in turn was attached to the balloon. The rotator was driven by a continuous motor through a spring coupling.

The gondola hanging below the balloon, revolved around the vertical axis. The optics of the photometer aimed at 30° from this axis describing a circle of constant zenith distance. The optics made possible to measure the luminance of the sky at the wavelength of 5100 A with a field of 4° in diameter. The light received by the photomultiplier was amplified and telemetered three signals of different gains. Two types of in-flight calibration were done: Optical on which at a regular rate, a radioluminescent patch and a mask were successively passed in front of the photomultiplier allowing the dark current of the photomultiplier to be measured and Electronic where a series of reference voltages were sent to the input of the amplifiers allowing to control the linearity of the measurements.

The electrical energy needed for the experiment was supplied by two nickel-cadmium batteries, one of which supplied the electronic system and the other the converter which gave the stabilized power for the electronic circuits. The batteries provided an autonomy to the system in flight of 15 hours. Total weight of the payload was 30 kgs.