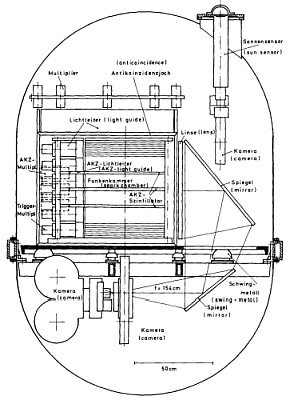 This experiment was developed to measure the solar and atmospheric neutrons in energy and direction above 50 MeV. The working principle is the double elastic scattering process of the incoming neutrons with hydrogen atoms.

In the figure at left can be seen a schematic drawing of the apparatus. The hydrogen is contained in thin plastic scintillator and polyethylene plates. Between these plates, spark chambers have been inserted in order to detect the trajectories of the recoil protons. The sparks are recorded photographically through a Fresnel prism and two mirrors for each of two coordinates. Charged particles which could trigger the apparatus are rejected by an anticoincidence counter. The whole stack of spark chambers and scattering material consists of six independent groups of equal thickness. Each group is viewed by a set of photo-multipliers which produce an electrical pulse upon the occurrence of a recoil proton. A coincidence of pulses from at least two of the six groups is required to indicate a double scattering event and to subsequently fire the spark chambers. The figure also shows three scintillator plates in the stack which can be used as additional anticoincidence counters against single scatterings with long proton tracks or Compton electrons or electron pairs of large range. A third camera records for each event the direction of the sun as seen from the apparatus. The apparatus is contained in a pressurized gondola which has a diameter of 170 cm and a height of 250 cm. The total weight of the experiment is about 1200 kg.