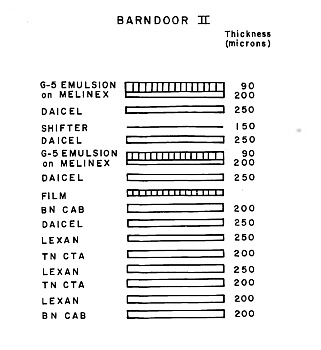 At left we can see a diagram of the composition of the basic detector of the Barndoor II emulsion stack. It used the "sandwich" technique of nuclear emulsions and plastic sheets held rigidly together. The stack covered an area of 13.8 square meters of detector, and was composed by three sandwiches of emulsions and plastics. Set A was moved relative to sets B and C when the balloon reached float altitude and also shortly before descent. The different positions were separated horizontally by two inches, and the overall effect was to define, for each track in the 8 layer, different locations in the A layer which thus distinguished between tracks recorded at ceiling and those detected during the balloon ascent and descent.

Original plan for the flight was to spend 40 hours at float. However, an early termination was neccesary due to trajectory of the balloon toward Mexico. At landing, the parachute did not immediately collapse and package dragged causing damage to gondola framework.

In all fourteen hours of flight were considered successful.