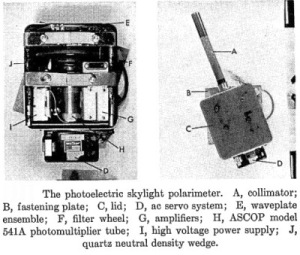 The polarimeter was developed to measure the degree of linear polarization and relative intensity variations in four narrow spectral intervals.

The instrument had a field of view of 3º. The principal design features are schematically shown at left. A collimated beam of polarized light passes through an optical train consisting of a rotating half-wave retardation plate, a stationary Glan prism, an interference filter with peak transmission in the neighborhood of the characteristic wavelength of the retardation place, and a quartz neutral density wedge. The emergent beam impinges upon the photocathode of an end-window type photomultiplier tube. The resulting sinusoidal photo signal passes through auxiliary logic and detection circuits and is recorded.

The system weighed about 10 kg and measures 25 cm x 25 cm x 25 cm was designed to operate on 28V DC to facilitate operation either from an aircraft or a balloon. For this test flight the polarimeter -encapsulated in 3.2-cm Styrofoam- was mounted onto a truncated, pyramidal gondola in such a fashion that it could scan through 270º symmetrically about the local nadir. A Wollensak time lapse camera was also onboard with its objective pointing toward the nadir, and the direction of the film transport parallel to the plane in which the polarimeter would scan. The color photographs, taken once every minute, have been utilized in two ways; namely, to determine the type and nature of the underlying terrain and surrounding sky and to fix the azimuthal orientation of the scan plane with the aid of the known trajectory of the balloon and prominent topographical features. This was later used to check the performance of the azimuth stabilization control.

Also was onboard a seven-channel oscillograph recorder as a backup system, a Barocoder, and telemetering equipment to receive and execute commands sent from the ground station and to transmit on the PCM telemetry system scientific and auxiliary data to the ground station. On-board banks of silver cadmium and solar cells furnished the required power. The gondola was fitted with an azimuth stabilization control driven by a torque motor, to allow that the polarimeter would always scan in the principal plane through the sun.

A post-flight comparison of the photographs obtained with the time lapse camera and the trajectory of the balloon mapped by visual tracking and the chase plane indicated that the azimuth stabilization control had not functioned properly when it was intermittently switched on while the balloon was ascending and while it was at ceiling. Hence, the polarimeter scan was not confined to the principal plane through the sun. This resulted in the measured values of polarization and relative intensity variations being not truly representative of the actual parameters to be associated with the incoming beam but only of the lower limits that can be set on these parameters.