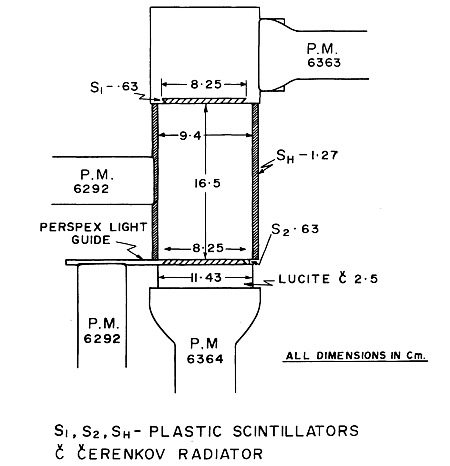 The objective of the flight was to make measurements of the vertical intensities of protons and helium nuclei in the stratosphere over Hyderabad, India during the International Quiet Sun year in April 1965. At left we can see a basic scheme of the instrument used for this measurements aproton-alpha telescope. It consisted of two thin plastic scintillators S1 and S2, and a lucite Cerenkov radiator C. S1 and S2 (each 6.3 mm thick) were viewed by diffuse reflection and through a Perspex light guide respectively as shown in the scheme. C was blackened at the top so as to eliminate upward moving splash albedo. The counter telescope was protected against side showers and 'out-of-geometry' particles by surrounding S1 and S2 with a cylindrical plastic scintillator SH. S2 limited the sensitive area of C so that the full cone of Cerenkov radiation produced by the incident particle was directly seen by the photomultiplier. Thereby edge effects in the Cerenkov radiator were reduced to a minimum.

Events were selected by a triple coincidence in the three detectors: S1, S2 and C. To reduce the total number of events recorded, so as to get a clear photographic record of the pulses, the electronic logic used was such that all events in which the pulse from S1 was less than 1.6 times the most probable pulse due to a singly charged particle, pulse heights in S1, S2 and C were recorded once for every four such events. However, all events in which S1 had a pulse greater than 1.6 times were recorded without any scaling and full pulse height information for all helium-like events was obtained. Since the counting rate due to 'singly charged' events was about 30 times that due to helium nuclei at flight altitude, the scaling didn't introduced any appreciable error in deducing the flux of singly charged particles from the observed pulse heights for the scaled-down events. Pulse heights in S1, S2 and C and the occurrence of side shower events were displayed on a double beam cathode ray tube and were photographed on a continuously moving film.