Developed by University of Rochester 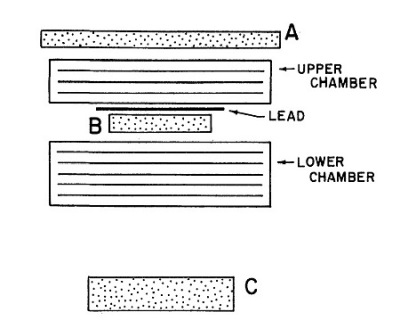 The detector used in the present balloon flight consisted of a scintillation-Cerenkov-counter system in conjunction with two spark chambers. Figure at left illustrates the essential geometry of the detector. The two plastic scintillators A and B, together with the Lucite Cerenkov counter, C, were used to trigger the chamber. The upper scintillator (A) was seven inches in diameter and half an inch thick and was viewed by a photo multiplier through a non-scintillating Lucite light pipe. The lower scintillator (B) was three inches in diameter, half an inch thick and was also viewed by a photo multiplier. The Cerenkov counter C consisted of a one-inch thick non-scintillating Lucite disc four and a quarter inches in diameter viewed directly from below by a photo multiplier. The upper surface of the Lucite was blackened to make the telescope sensitive only to particles traversing the counter in the downward direction.

Immediately above the B detector a sheet of lead was placed which would convert 17% of all energetic photons normally incident on it into electron-positron pairs. The arrival of a gamma ray which converts in this lead sheet was indicated by a coincidence between the B and C detectors in the absence of a response from the A counter. Coincidences of the type BCA were used to trigger the two spark chambers. These chambers were located between the A and B detectors and between the B and C detectors. The upper chamber had four gaps, while the lower chamber had six gaps. Two views, at 90°, of the chamber were photographed when the BCA trigger occurred. The photographs were then examined to confirm that a gamma ray has indeed been responsible for the BCA pulse. During the flight of the detector, it was found that only 10% of the BCA pulses were associated with gamma rays incident on the detector. The remaining pulses were due to a variety of background effects.

In conjunction with the triggering of the spark chamber, auxiliary data were recorded giving the orientation of the gondola relative to the earth's magnetic field, the barometric pressure , the temperature, the time, and other parameters relevant to the internal functioning of the equipment. The figure at right is a photograph of a gamma ray recorded during the flight of the detector. 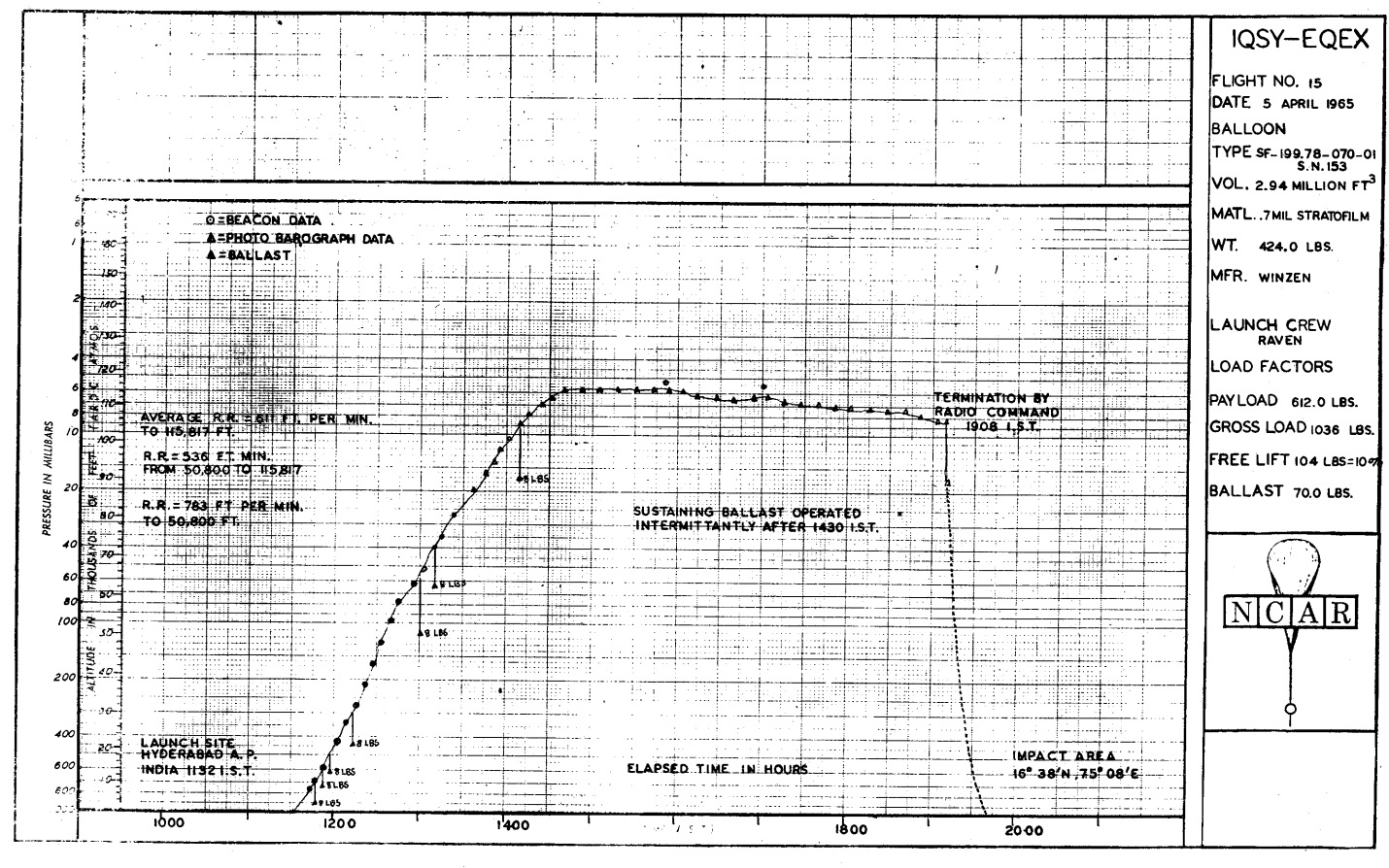 After some delays, the balloon was launched at 11:32 local time on April 5, 1965. Just after balloon release, a technician reported having seen a hole near the top of the balloon as it ascended. A quick check of the ascent rate indicated a slower than normal ascent rate. Ballast was immediately expended in an effort to get the balloon quickly to altitude where a small hole would become insignificant. Approximately 76% of the available ballast was expended. Due to this, the balloon reached an altitude of 119.000 ft and steadily dropped altitude until cut-down, when it was at 114.000 ft four hours and 35 min later. During the flight the balloon drifted from nearly overhead of Hyderabad, India to near Athni, India. The instrument was switched on at 14:00 local time when the balloon was ascending and was at 103.000 ft. The detector was active throughout the whole flight. During the period at altitude the detector recorded a total of 392 gamma rays.

An important phase of the experiment was programmed for 17:45 after which the flight was terminated by radio command from the tracking aircraft. The descent rate was not excessive and impact, as observed from the aircraft, was quite gentle. Impact occurred at 16° 38' N, 75° 08'E. Efforts to contact the ground recovery crew failed due to a faulty antenna connection on the recovery truck. The aircraft landed at Belgaum for fuel, and remained overnight. The following morning the aircraft returned to Hyderabad. The recovery crew was advised by phone of the impact location. Recovery was accomplished on the afternoon of 6 April with the recovery crew returning to Hyderabad on the evening of 7 April. The spark chamber appeared to be in good shape, except for the probes and a pressure valve which was knocked off during impact or by natives who rolled the package under a tree to protect it from the sun. After opening the chamber additional damage was observed. The internal support frame was considerably distorted and the camera lens was separated from the camera. Further investigation indicated the camera damage occurred shortly after termination of the flight, most probably the result of the parachute opening on descent. The camera lens had to be returned to the manufacturer for realignment, and since there was no replacement valve, a second flight was not possible.