As additional payloads were also included:

A package of nuclear research emulsions with various sensitivities and having a large horizontal area provided by the U.S. Naval Research Laboratory, Washington, DC. The mission called for the detector to reach reach a pressure altitude of approximately 3 mb and stay there for 10 to 12 hr. That would make possible for the first time to obtain a charge spectrum for primary heavy nuclei with an almost negligible correction for fragmentation in the overlying atmosphere near the earth's magnetic equator. These data, in combination with data obtained from similar exposures during IQSY at Ft. Churchill and Minnesota, would make possible the comparison of spectra, fluxes and ratios of light to medium to heavy groupings for primary cosmic ray nuclei with Z > 3 over a wide range of energies. The combined data could then be used to study various mechanisms which may play a role in the propagation of the cosmic radiation through interstellar space.

An experiment to study the effects of Cosmic Rays on Seedlings provided by Osmania University, Hyderabad, India 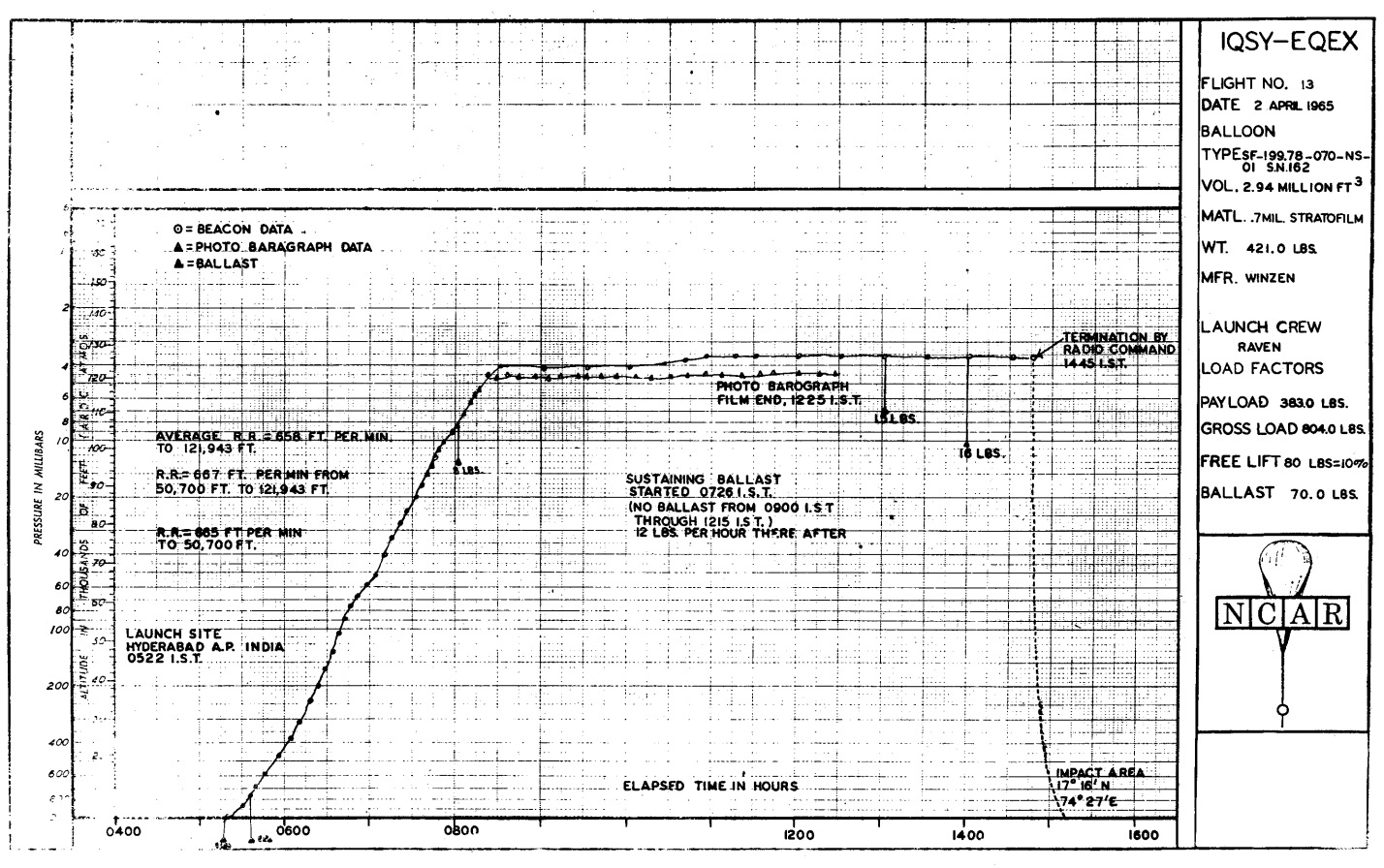 After the launch failure of this same group of payloads on March 18, the telescope package along with the rotor, balloon control instruments and ballast were placed on the 4-wheel launch cart, giving the appearance of a weird assortment of unrelated packages. However, as the individual packages were lifted aloft one at a time and the flight train was fully suspended, order was restored.

The balloon was launched at 5:22 local time on April 2, 1965. The launch was accomplished in wind of 2 to 3 mph and was smooth. When the flight reached the 30,000-ft level, the DF antenna was extended by radio command from the base station.

The scientific equipment worked well and the telemetry signal was very strong, with little noise. The recovery aircraft had refueled at Belgaum and was enroute to terminate the balloon flight. Due to thunderstorm activity, considerable noise prevented reading the beacon. A visual contact was made on the balloon, and command termination was initiated while the plane was directly under the balloon, with no visible signs of release. Repeated effort to terminate the flight had no apparent result. The aircraft eventually returned to Hyderabad.

At Hyderabad, it was learned that the flight had been terminated by the base station at at 14:45, 15 min before the timer would have terminated it. The payload had been released but the balloon had not ruptured. Thus, the efforts of the tracking crew to effect release could not have any effect. The base station operator made the cut-down decision on the basis of trajectory and upper wind data which indicated the balloon's position was near the coast. Since the accuracy of the timers can be + 10 min, it was felt the aircraft would be in the area and be able to DF on the balloon. The location of the equipment was not known until word was received by wire the next day. Impact was 20 mi NE of Kolhapur. The new instrument container was in good shape and the instrument was not damaged.