The main experiment on the flight was provided by University of Rochester, and was aimed to measure the integral intensities of several heavy charge groups of the primary radiation. Additionally, measured the splash albedo, and incident gamma radiation above 50 Mev. The relationship to IQSY was very direct for the charged particle intensities to obtain a measurement at a high cut-off of charged particles at solar minimum and thus information on the rigidity dependence of solar cycle modulation.

As additional payloads were also included other two experiments.

The first one provided by the University of Tasmania consisted of a flight unit containing a 3-fold Geiger counter telescope and two BF3 counters. Both BF3 counters were enclosed in polyethylene moderators 1 in. thick. One counter contained BF3 enriched to 96% in the isotope B10 while the other contained the natural isotopic mixture of boron. The latter was referred to as the unenriched counter. This flight unit was similar to units previously flown at latitudes between Wilkes, Antarctica, and Lae, New Guinea for the purpose of studying the latitude effect on cosmic ray neutrons during the period of minimum solar activity. By making the measurements at Hyderabad it was possible to extend this survey to a geomagnetic cut-off of 17 BV compared with 15.8 BV at Lae. Data from the survey have permitted information on the flux of albedo neutrons and on the rate of production of C14 in the atmosphere to be obtained.

The second one provided by the Tata Institute of Fundamental Research from India, served to test a new technique of using single crystals of silver chloride as radiation detectors. This method possesses several unique advantages such as insensitivity to humidity, absence of distortion, non-chemical development at room temperature and delineation of the high-energy cosmic ray tracks within two hours and crystal thickness greater than 3000 microns. Moreover, for the study of cosmic rays and nuclear events, it appeared to be a convenient and distortion free detector. However, the experiment was not successful. 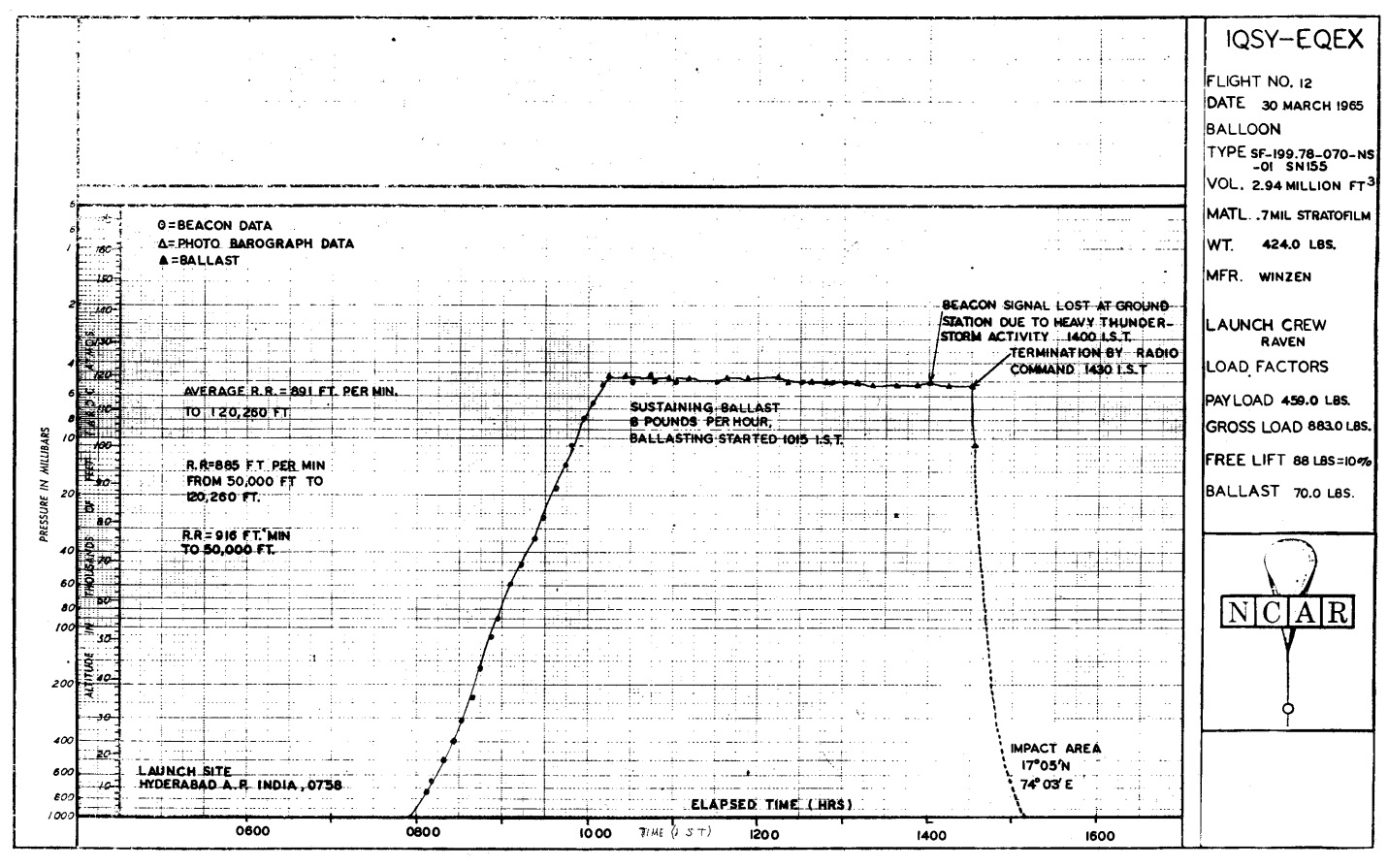 A key frame platform was devised for the counter telescope with the control instrumentation container on one end and the X-ray counter on the other end. Ballast was positioned in a centrally located hopper to balance the system. The entire bottom surface of the platform was fitted with one layer of crush pad. For descent, a 38-ft parachute was used to help minimize any damage from a hard impact. To enhance a smooth launch, the anchor truck was driven away from the balloon during launch resulting in a very slow and smooth lift off at 7:58 IST.

The balloon's ascent was normal, reaching an altitude of 120,000 ft at 10:06 IST. Due to high wind velocities at ceiling, the flight was terminated after 4 hr to allow recovery in accessible terrain. The decision for termination was made by the scientific observer in the aircraft. The release occurred 40 mi west of Karad, with impact 9 mi west of Karad. Considerable damage was sustained by the Rochester counter telescope. On first examination, it appeared to be a result of a hard impact; however, telemetry data indicated a longer than normal descent time. A more thorough investigation conducted in the laboratory indicated a possible failure in the pressurization container.

Apparently, a flat rubber gasket leaked at altitude, resulting in a low internal pressure at sea level which caused the container to collapse around the instrument. The container was removed with a can opener and tin snips. No spare container was available, therefore, a second flight was not possible. The University of Tasmania's instrument performed well with considerable telemetry data being recorded. The instrument was originally scheduled for only one flight but was in such good condition that it was checked out and scheduled for another flight.