As additional payloads were also included:

A package of nuclear research emulsions with various sensitivities and having a large horizontal area provided by the U.S. Naval Research Laboratory, Washington, DC. The mission called for the detector to reach reach a pressure altitude of approximately 3 mb and stay there for 10 to 12 hr. That would make possible for the first time to obtain a charge spectrum for primary heavy nuclei with an almost negligible correction for fragmentation in the overlying atmosphere near the earth's magnetic equator. These data, in combination with data obtained from similar exposures during IQSY at Ft. Churchill and Minnesota, would make possible the comparison of spectra, fluxes and ratios of light to medium to heavy groupings for primary cosmic ray nuclei with Z > 3 over a wide range of energies. The combined data could then be used to study various mechanisms which may play a role in the propagation of the cosmic radiation through interstellar space.

An experiment to study the effects of Cosmic Rays on Seedlings provided by Osmania University, Hyderabad, India

Another set of emulsion stacks that were provided by Tata Institute of Fundamental Research, Bombay, India for primary cosmic ray experiments. 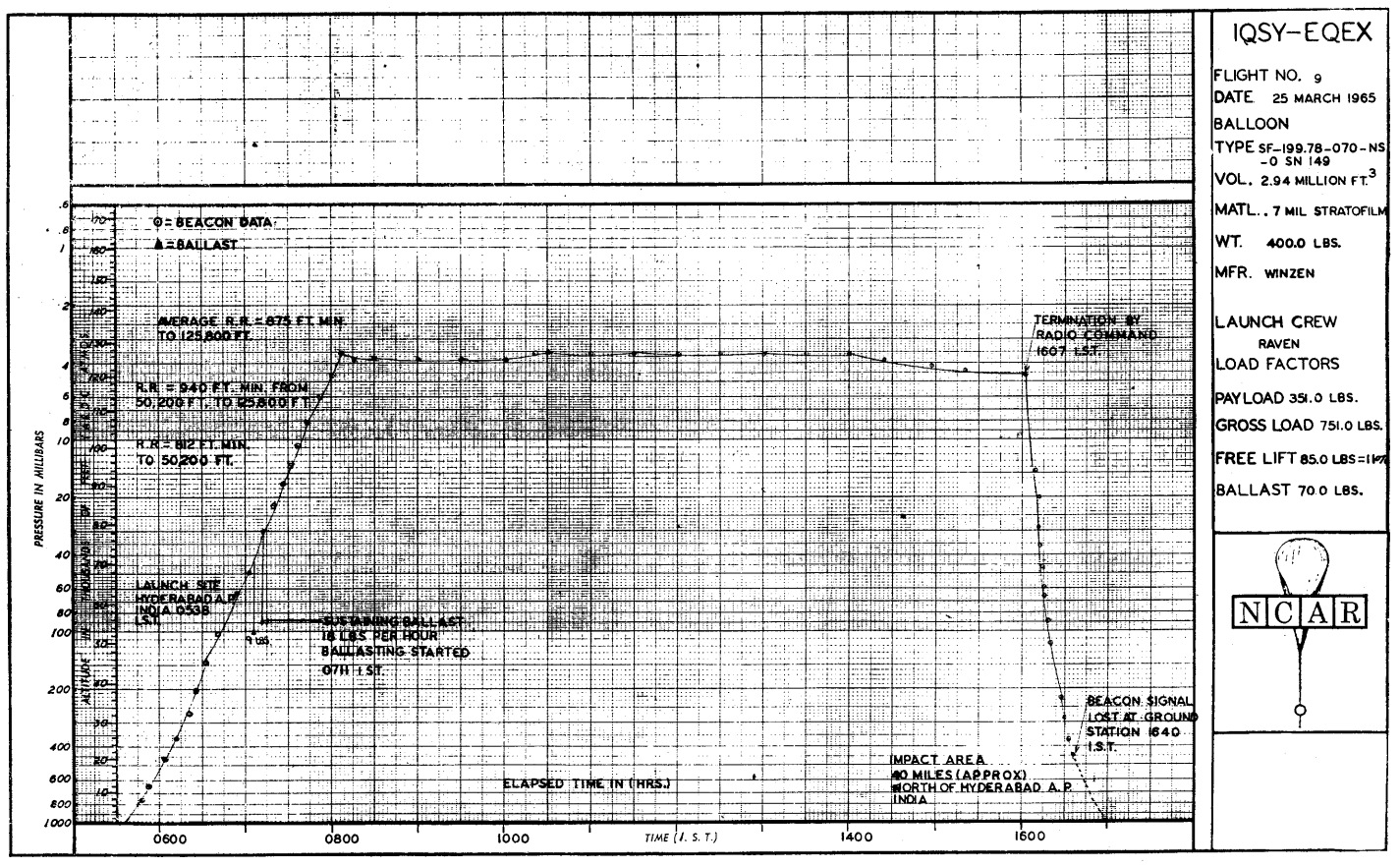 Balloon was launched from Osmania Campus on March 25, 1965. During inflation of the balloon, several small abrasions were repaired near the inflation tube attachment. The balloon's deployment was very poor between the 45-and 55-ft bubble height. Several small abrasions were noted; however, no repairs were necessary. During launch, a light crosswind forced the balloon to the left slightly. Efforts to hold the anchor line near the instrument load to limit the side travel of the instruments failed and the wires were pulled free from the anchor line firing box. In an effort to save the flight from being dragged on the ground, the anchor line was cut at the anchor truck allowing the line to ascend with the flight train. With the anchor line and squib wires hanging alongside the rotator, counter telescope and telemetry antenna, it was doubted whether the experiment would be successful; however, telemetry signals with high noise level were received intermittently. Some scientific data were obtained by that portion of the flight which did not require scanning, so the flight was allowed to continue.

The balloon ascended at an overall rate of 875 ft/min to floating altitude of 125,800 ft and remained at ceiling for 8 hours. The tracking aircraft was undergoing repairs at the time the balloon reached ceiling and was not made available in time to service this flight. Since the exact location of the balloon was not known, an estimated trajectory was plotted with existing wind data and theodolite.

The flight was terminated by radio command from the base station. Recovery was accomplished two days later after telegraphic notification that the payload had been located. The flight had impacted about 40 miles north of Hyderabad. The counter telescope had incurred some damage to its framework but the instrument continued to perform well after a laboratory checkout. Since this was a prototype instrument and one of a kind, precautionary measures had been taken to construct a flight package to insure against serious damage. The local workshop built a container which served quite well during flight, and was later used to ship the instrument to Australia for additional flights.