The main objective of the flight was to expose a package of nuclear research emulsions with various sensitivities and having a large horizontal area provided by the U.S. Naval Research Laboratory, Washington, DC. The mission called for the detector to reach reach a pressure altitude of approximately 3 mb and stay there for 10 to 12 hr. That would make possible for the first time to obtain a charge spectrum for primary heavy nuclei with an almost negligible correction for fragmentation in the overlying atmosphere near the earth's magnetic equator. These data, in combination with data obtained from similar exposures during IQSY at Ft. Churchill and Minnesota, would make possible the comparison of spectra, fluxes and ratios of light to medium to heavy groupings for primary cosmic ray nuclei with Z > 3 over a wide range of energies. The combined data could then be used to study various mechanisms which may play a role in the propagation of the cosmic radiation through interstellar space.

Another set of emulsion stacks were provided by Tata Institute of Fundamental Research, Bombay, India for primary cosmic ray experiments. 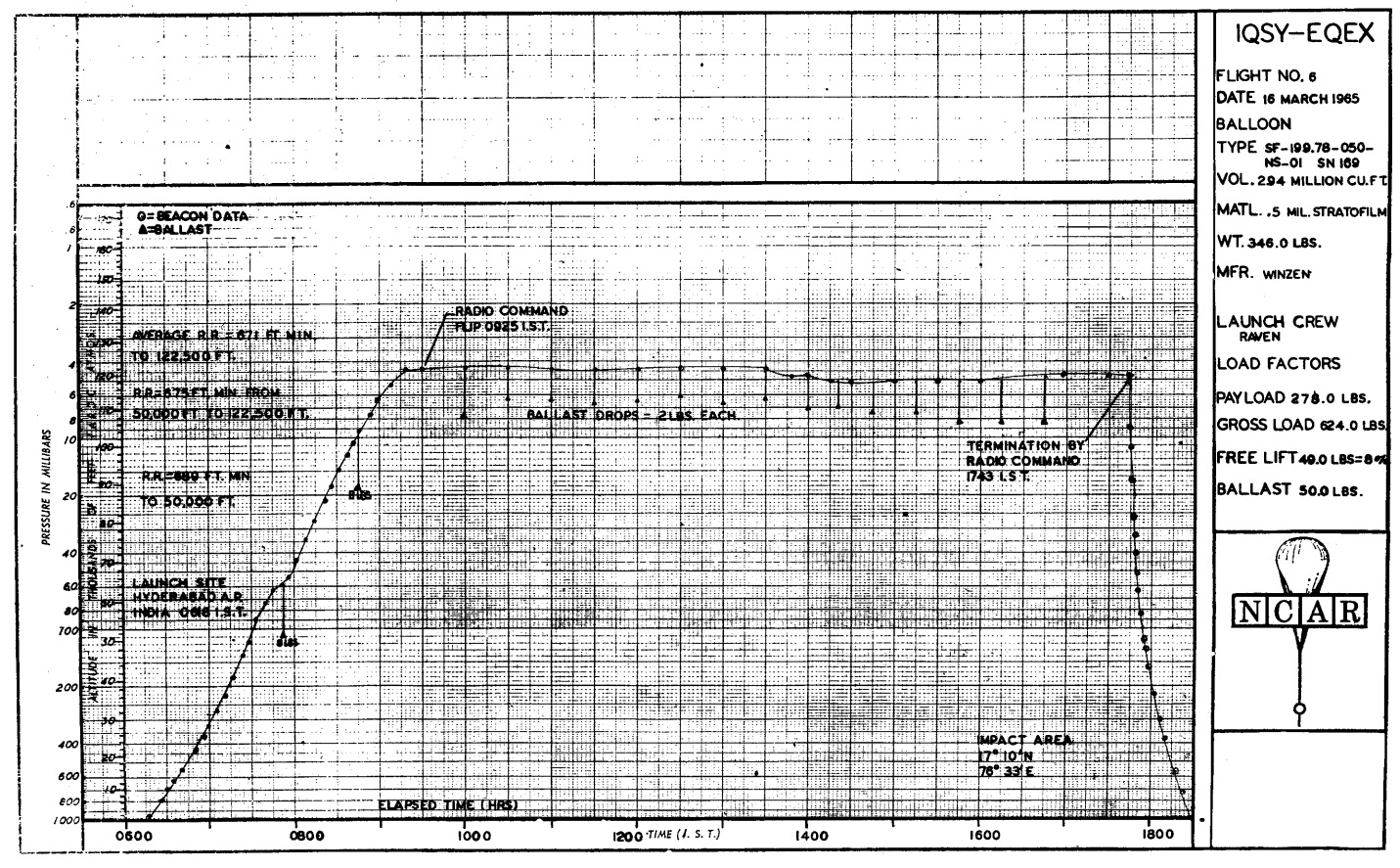 The primary experiment was the NRL nuclear emulsion flip stack and photobarograph. During this program, however, the basic flipping mechanism was incorporated into an orienting device built by TIFR. To a large extent, the orienting mechanism dictated the system's configuration. Any mass, such as balloon control instrumentation and ballast, had to be positioned as near the vertical axis as possible. The standard mounting of ballast hoppers on the sides of the balloon instrument box produced excessive inertia, which was incompatible with the drive mechanism of the orienter. A combination ballast container and impact cushion was designed and positioned under the control instrumentation, with the added advantage of dropping ballast from a single point without affecting the balance of the experiment. Structural rigidity was accomplished by attaching four 1/8-in. steel cables to the control instrumentation box and attaching the other ends to the bottom of the orienter framework. The cylindrical photobarograph was placed between the control instruments and orienter.

Nylon line was used for suspending the configuration below a 32-ft parachute. Since no metal rings could be used, it was necessary to add a 12-ft nylon line to the suspension lines so that the "D" rings on the parachute would be a sufficient distance from the emulsion stack. The overall configuration was about 7 ft high; however, since weight concentration was in the lower end, it was easily launched using the anchor line technique.

During inflation, the balloon had to be repaired at the inflation tube attachment flange. The damage in this area seemed to be due to the stiffness of the numerous layers of tape and material. The balloon was particularly vulnerable to abrasion and tearing since it was 0.5 mil material. This balloon was one of the two 0.5 mils specifically requested for this scientific experiment since it was felt the difference in weight would result in a higher floating altitude. With inflation complete and the experiment fully checked out and ready for release, the small pibal balloon was released to check last minute wind direction. At this point, the wind had shifted 1800 with a velocity of about 2 mph. The launch was delayed while the launch crew anchored the balloon to a temporary anchor vehicle, allowing removal of the anchor line and repositioning of the anchor truck. The anchor truck was normally left stationary; however, this wind shift made it necessary to move the anchor truck during actual launch. The delay took about 10 min. As the balloon was released, it rose very slowly but did not move to the position over the instruments. The command was given to the man In the anchor truck to back away from the balloon thus pulling the balloon toward the instruments which were also being moved in the direction of the truck. This method of launch allowed the balloon to lift the payload while not directly over the load. When the instrument load was 15 to 30 ft off the ground, the anchor truck stopped and the momentum of the balloon brought it directly over the load. This configuration was planned so the package could be released with the downward pendulum swing occurring safely above the ground. Launching under these conditions with a swing from the height of the launch cart would result in damage by dragging and striking the ground.

In this particular launch, the load was released with very little downward swing at 06:18 IST. The DF antenna was dropped by command at 0620 and was observed to extend fully with the antenna weight falling off and landing on the launch field. Ascent was normal at an average rate of 671 ft/min to 122,500 ft. Since the lowest pressure level was desirable, the balloon was allowed sufficient time to stabilize at ceiling, at which time the command circuit energized the flip mechanism and keyed the flip confirmation circuit. The flight was terminated by radio command from the tracking aircraft after 8.5 hr at ceiling. The payload was spotted down by the tracking aircraft at 17º 10' N, 76º 33' E and recovered the following day by ground recovery crew.