The main instrument on this flight was a fast neutron detector aimed to measure 1-10 Mev recoil-proton and heavily ionizing events produced by neutrons in an organic scintillator. The detector itself is a 5 cm x 5 cm cylindrical volume of organic liquid phosphor, which is surrounded by a 6 mm minimum thickness of plastic scintillator which acts as an anticoincidence shield for charged particles. The composite detector is viewed by a single 5 cm photomultiplier. The set is shown in the far left scheme.

Also was part of the flight a X-RAY Counter developed by the University of California aimed to measure atmospheric gamma ray as a continuation of an already performed measurement campaign carried out in Minneapolis and in New Mexico, thus completing a three-point latitude survey. Also using the low gamma ray background near the equator the scientists examined the quiet sun for X-ray emission in the 10 to 100 kev region. 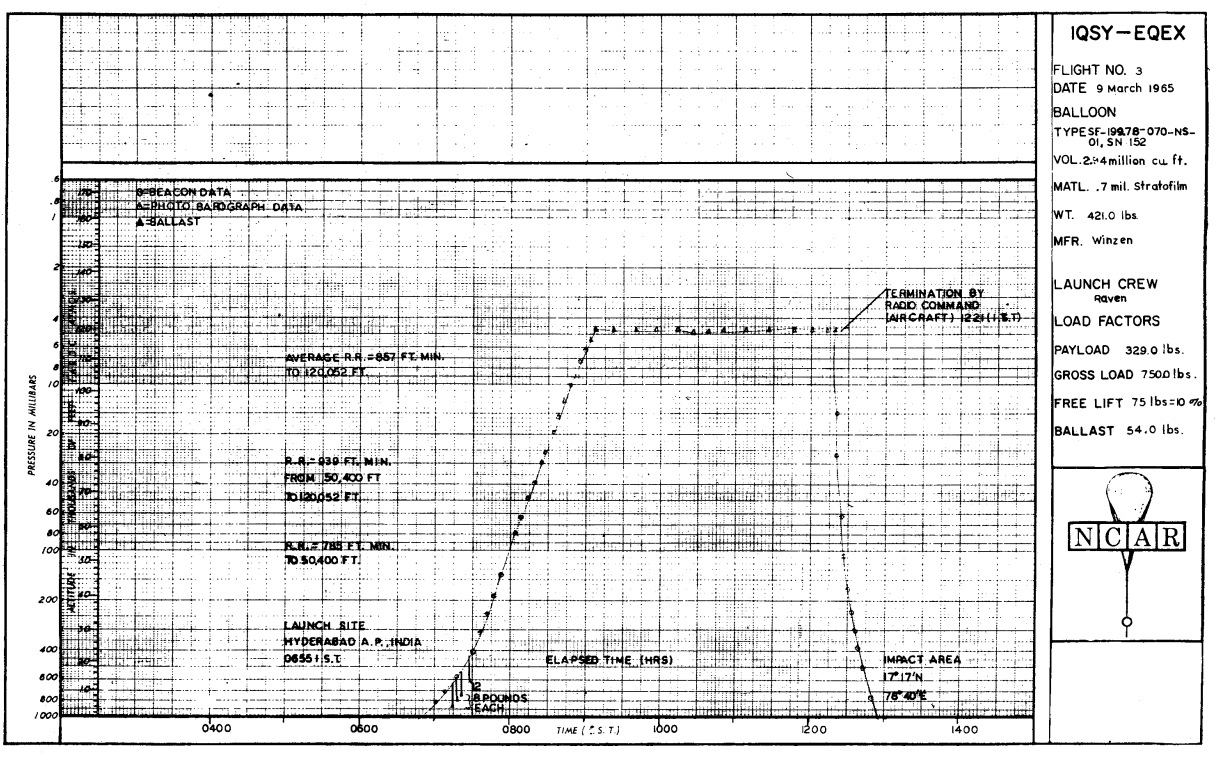 Balloon layout and inflation was easily accomplished in almost calm surface wind conditions. The balloon required some minor repairs on the inflation tube and at the inflation tube attachment flange. During the launch, the balloon ascended rapidly and began to veer to one side. The scientific instrument load was rolled into position and was gently lifted free of the launch cart. The anchor line was fired loose at 30 ft above the ground while still under slight tension resulting in a very smooth launch. The beacon antenna was dropped by radio command several minutes after launch. The ascent was 785 ft/min to 50,400 ft and 939 ft/min to ceiling. The telemetry from the X-ray counter was intermittent with a high noise level. The X-ray counter has two antennas which are spaced about 6 ft apart and suspended downward about 4 ft. Prior to launch and lift off, these antennas were laid on the ground and had to be carefully handled till the instrument load was lifted by the balloon. The antennas may have been damaged during launch.

After 3.1 hr at altitude, the flight was terminated by command from the base station. Descent took 36 min with the impact occurring at 170º 17' N, 78º 40' E. Recovery was accomplished the same afternoon. Both instruments were recovered in good condition.