Developed by University of New Mexico

Balloon launched on 3/12/1964, from Holloman Air Force Base, Alamogordo, New Mexico, US 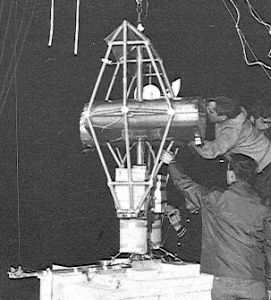 The payload was composed by a solar-oriented, high-energy neutron detector of the proton-recoil type.

A total of four flights were performed between 1963 and 1964 at Holloman Air Force Base in New Mexico.

In the image at left we can see the instrument flown during pre-flight preparations. A similar detector has been flown on a NASA Orbiting Solar Observatory, OSO-G in 1969