Balloon launched on 8/6/1963, from University of Minnesota Airport, New Brighton, US 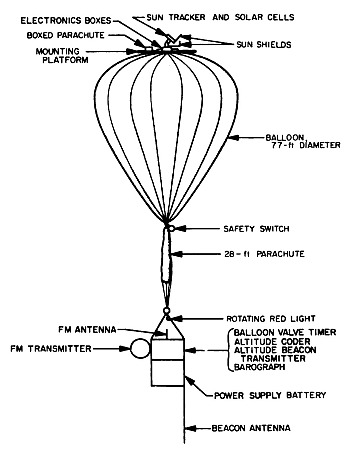 The purpose of the high altitude solar cell calibration program is to produce air mass zero (AM0) standard solar cell that can be used for accurately setting solar simulator intensities. The program was started in 1962 by the Jet Propulsion Laboratory.

Since the output of solar cells is spectrally selective, the electrical power derived from solar cells depends on the total intensity and the spectral distribution of the light source: the Sun. Attempts were made to procure a laboratory light source which has the same spectral character and intensity as the Sun. However, such attempts have been complicated as different types of radiation sensing devices, such as pyrheliometers and thermopiles, have been used which can not be accurately calibrated on either a total intensity or spectral intensity basis.

To overcome this was introduced the concept of flying cells on a balloon, to measure their output at altitudes, to recover the cells and to use them as reference standards. The calibrated standard solar cell is placed in the solar simulator beam, and the beam intensity is adjusted until the standard solar cell reads the same as it read on the balloon.

This was the first balloon flight for the solar cell calibration program. It was the starting kick of an initiative that would endure more than 40 years and spanned through more than 80 flights.