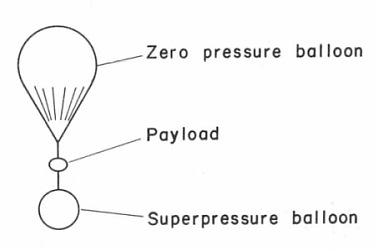 The Sky Anchor was a two balloon system developed and tested by the National Scientific Balloon Facility, during the 70's and 80's decade. It was based in an idea first envisaged in 1962 by Ash and Singer, two engineers of the Republic Aviation Corporation whom described a novel technique denominated "Boostrap System" for maintaining stable balloon flight for extended periods. Based on that concept in 1963, scientists at NCAR developed the first iteration of what they denominated the "Sky Anchor" system.

On August 5, 1963, a first proof of concept of the "sky anchor" system was launched from the NCAR grounds at Boulder, Colorado. The top balloon was a 0.5-mil polyethylene balloon, 18 feet in diameter, and weighing 4 pounds. The "anchor" balloon was an 8-foot bilaminated Mylar sphere weighing 2.5 pounds. Payload was a 0.8- pound timer set for 72 hours. The Mylar balloon by itself could carry this payload only to an altitude of 47,000 feet. However, the amount of air sealed into the Mylar balloon was metered to provide superpressure at 56,000 feet, with flight altitude computed to be 63,000 feet in daytime and 58,000 feet at night. The balloon system flew for two days at the design altitudes through two sunsets, a remarkable achievement for an "unballasted" zero pressure balloon. Failure to achieve the full 72-hour-flight time is attributed to gas loss in the zero pressure balloon, since it evidenced some gas loss priori to flight when held inflated over night.