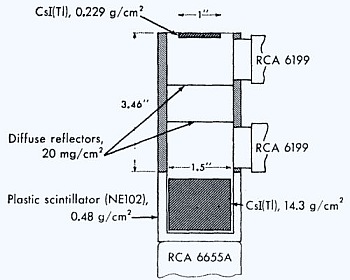 The immediate goal of the experiment was to make a precise measurement of the primary proton flux over a relatively narrow energy interval at as low an energy as possible.

The technique utilized to detect and identify the particles was to make dE/dx and total-energy measurements on each particle. Such measurements serve to identify the type of particle as well as to measure its energy. For this purpose three optically separate scintillation phosphors were used. The detector is shown in cross section in the figure at left. The top thin crystal, viewed only by the top photomultiplier tube, made the dE/dx measurement. The total-kinetic-energy measurement was made by the lower cesium iodide crystal viewed only by the lower RCA 6199 tube. In addition there was a plastic phosphor, optically sealed from the total energy crystal, which was viewed by the RCA 6655A tube. By a coincidence-anticoincidence arrangement, acceptable particles mere required to pass through the top crystal and stop in the lower crystal. Pulse-height information from the two cesium iodide crystals was telemetered and recorded in digital form at the ground receiving station.

The balloon was launched from Sioux Falls, United States on November 5, 1962. During the entire flight was obtained 138 minutes of usable data at an average altitude of 120.000 ft.