Balloon launched on 9/5/1962, from University of Minnesota Airport, New Brighton, US 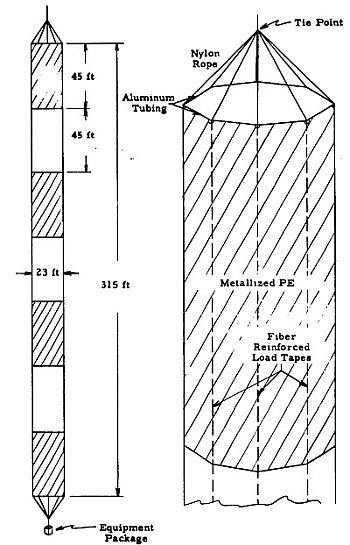 The objective of the Scatterloon project was to study the feasibility of establishing an effective scatter propagation communication path below the ionosphere that would be free from interruption due to ionospheric storms. The study was coordinated by Dr. William J. Thaler and sponsored by the Office of Naval Research.

For the field experiment of testing the forward scattering technique, it was considered expedient to launch the scattering element in the vicinity of the General Mills balloon launch facility at New Brighton, Minnesota with the transmitting and receiving stations at LaCrosse, Wisconsin and Wadena, Minnesota, respectively. The design altitude required to obtain a line-of-sight path (allowing some maneuverability) from the scatterer to the transmitter and receiving terminals is 13.600 + 2660 feet above mean sea level. Several methods were considered for bringing the scatterer to the required altitude, including airplanes, helicopters, tethered Aerocaps, etc. For reasons of technical feasibility, economy, and short preparation time, the helium-filled free balloon was selected as the transport means. This required, however, optimum meteorological conditions for launching and for wind direction and velocity at float to maximize time in the target zone.

At left we can see the essential dimensions of the scattering element that was used in the experiment. The shaded (blocking) areas were composed of aluminum foil polyethylene (PE) laminate and the clear areas were composed of red PE (the red provides visibility to pilots). The strips of material (39 in. wide laminate and 108 in. wide red PE) were assembled into gores running horizontally around the cylindrical scatterer. After all the horizontal seals were made the material was refolded in the vertical direction for making the final seal.

Several methods of deploying the scatterer were considered; among them, air inflation, curved pressure beams and rigid metal rings. It was believed the air inflation would have given the best deployment; however, it was considered impractical because of the large volume of air involved (approximately 130,000 ft 3 ), the extremely low internal pressure which could be tolerated due to the large radius, and the super heat problem which will cause added lift as the air contained within the scatterer heats up and causes a change of altitude. For ease of fabrication, the rings were modified to an octagon shape (23 ft diagonal) rather than the circular shape. The scattering element was suspended from a common tie point (at the base of the parachute) by eight nylon cords (1000 lb test) to the eight corners of the top octagonal ring. Also, the cylindrical plastic scatterer was reinforced by load bearing tapes extending vertically from the eight corners of the top ring to the corresponding eight corners of the bottom ring.

The weight of the plastic cylindrical portion of the scatterer was 378 pounds as fabricated and the total weight including suspension lines and rings was 442 pounds. 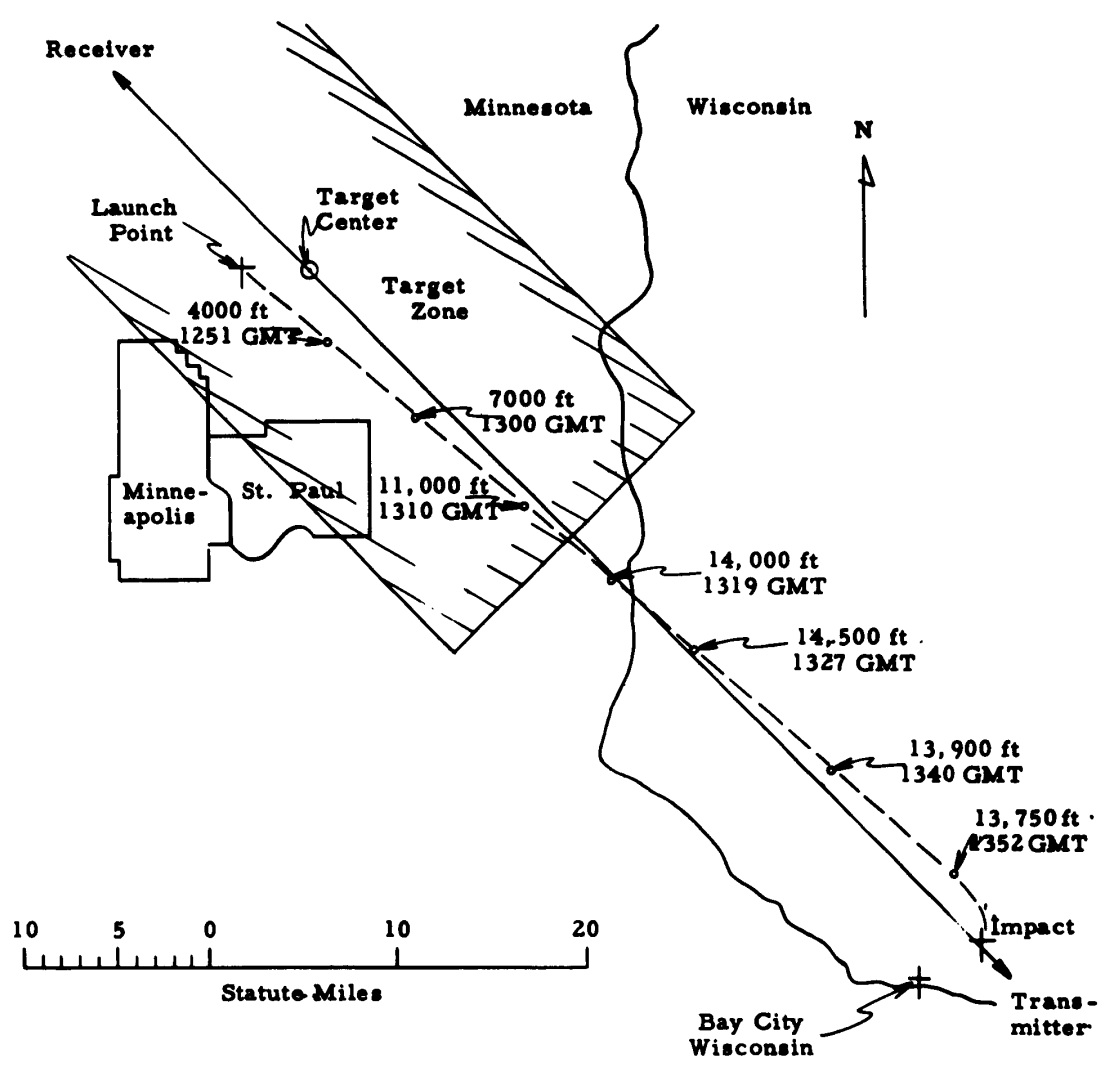 The launch was performed from the General Mills Flight Center in New Brighton, at 6:43 CST on September 5, 1962. Usual techniques of balloon launching (dynamic method) were considered unsuitable for this system because of its large size and length. Therefore, the vertical launch technique was used. As the name implies, the system was statically laid out to a vertical position by means of an anchor line attached to the bottom fitting of the balloon. After the entire load train (411 ft long) was vertical and the scatterer properly deployed, the anchor line was released from the balloon and the restraint at the bottom of the load train was released to allow the system to become airborne and rise to float altitude.

During this particular launch it was found that the winds (which were almost clam on the surface) were blowing at an estimated 5 knots at approximately 200 to 300 feet up. As the system was being laid out the wind gradually caught the reflector as it reached this altitude forming a gigantic sail. This made it necessary for the crew members holding the bottom end of the scatterer and lower instrument bag to move downwind to follow the motion of the upper part of the scatterer as it "sailed out". This required considerable agility on the part of the crew members involved.

The launch was performed quite smoothly in spite of the wind condition. The system ascended at a rather slow consistent rate of rise until it reached floating altitude 37 minutes after launch. Winds at the 14,000-foot level were slightly stronger than expected causing the scatterer to cross the southeast boundary leaving the target zone 33 minutes after launch. The trajectory of the balloon system was nearly down the centerline of the target zone in a southeasterly direction.

Although the upper winds were known to be about 40 knots, the Scatterloon took more time to reach altitude than expected due to the aerodynamic drag of the grating. The flight was terminated as requested by FAA because of its potential aircraft hazard. It was terminated 52 minutes after leaving the target zone at a point 4 miles southeast of Ellsworth, Wisconsin. Impact was in a clearing in a wooded ravine 4 miles northeast of Bay City, Wisconsin. The balloon and scatterer were not salvageable; however, the parachute and all other instrumentation were retrieved by the recovery crew.

During the test that endured 40 minutes was relayed a video signal from the station WKBT-TV (channel 18) located in Lacrosse, Minnesota. The station radiated a 251-Kw effective signal to the relay and then it was reflected to an S-band receiver atop a 100-foot base tower located at Wadena Air Force Base in Minnesota, 260 miles away.