Balloon launched on 6/13/1962, from University of Minnesota Airport, New Brighton, US 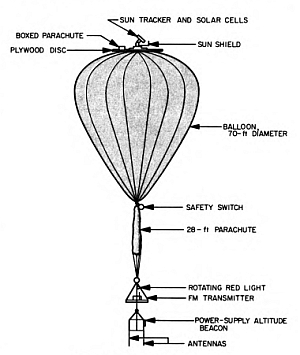 The balloon was launched at 09:19 CDT on June 13, 1962 from the General Mills Balloon Flight Center in New Brighton, Minnesota. The balloon reached a maximum altitude of 77,000 ft at about 11:15 CDT and remained at this altitude for approximately 3 hr around solar noon. During this time, the short-circuit currents of the 14 solar cells flown were measured. Also measured were the temperatures of both the front and back sides of control cells mounted on the same heat sink as the other cells. The balloon began its descent at 14:25 CDT and made Earth impact at 16:00 CDT, about 80 mi south of the launching site. The solar-cell payload did not suffer any damage from either the flight or impact.