Balloon launched on 1/16/1961, from Goodfellow Air Force Base, San Angelo, Texas, US 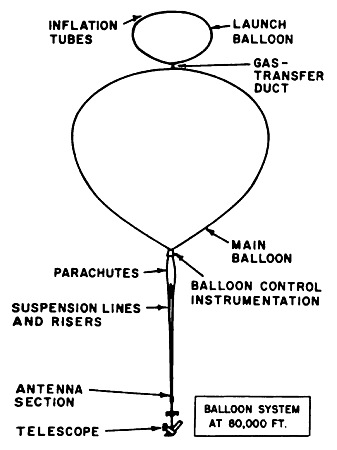 This flight was part of the testing phase of Stratoscope II one of the most sophisticated balloon-borne telescope systems ever flown. It's goal was to photograph planets and stellar nebulae from Earth's stratosphere with previously unseen precision in an effort that can be viewed in perspective as a distant precursor to the Hubble Space Telescope. The instrument was a 36-inch telescope, designed to permit greatly improved nocturnal observation of planetary and stellar objects with high resolution. The instrument weighed near 8.000 lbs.

In planning Stratoscope II, one of the prime considerations was to construct a balloon strong enough to lift such a heavy weight to the required altitude of 80,000 feet. Polyethylene film, commonly used for balloons, was then limited to a load-carrying capacity of about 4,000 pounds, and thus was unsatisfactory for the project. To meet this problem, the G.T. Schjeldahl Company of Northfield, Minnesota under contract to ONR, developed a reinforced laminated plastic film having high tensile strength and tear resistance. Schjeldahl also developed, a new balloon system capable of lifting the heavy telescope payload off the ground quickly while remaining unbuffeted by ground winds as high as 15 knots.

The test failed due to the burst of the launch balloon