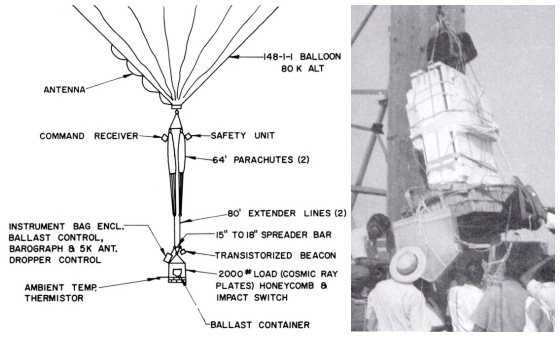 The main goal of this particular flight was to study cosmic radiation by exposing a heavy nuclear emulsion stack for an extended period of time in the stratosphere. The emulsion-tungsten assembly with a weight of 2000 lbs, was part of a joint research programme on nuclear interactions at very high energies between the Tata Institute of Fundamental Research from India and the Bristol University from England. In accordance with arrangements made during negotiations for the program, this stack was to be flown on a U.S. balloon with Indian-furnished hydrogen lifting gas and to float for 24 hr at 80,000 ft. As the program progressed, it became apparent that sufficient helium would be available for this flight, making the operation that much simpler and less hazardous. At left we can see an scheme of the flight train along with an image of the emulsion pack before launch.

The large emulsion stack used on Flight 2540 (April 16, 1961) which failed to reach float altitude, was recovered and prepared for a replacement flight. The flight system consisted of identical equipment as was used on Flight 2540, except for the balloon. A General Mills 189-1-1 (2 mil) balloon, saved from the Large Volume Impactor flights, was used in lieu of the 148-1-1 balloon destroyed on Flight 2540.

The balloon was launched on April 25, 1961 at 6:27 local time from Begumpet Airport, near Secunderabad using dynamic method. Rate of rise to 89.500 ft was 525 fpm. Telemetered temperature on ascent ceased at 41,000 ft, and telemetered altitude ceased at 84,470 ft. The float altitude was based upon theoretical altitude of the balloon with this payload. The balloon floated throughout the daylight hours on 25 April and its trajectory brought the system dangerously close to the east coast of India. An attempt to terminate the flight at this point failed. As darkness descended, the balloon of course began a slow descent, due to the sunset effect. The ballast system was set for 65,000 ft, at which point the ballast would be dropped and the system would once again ascend. Since altitude telemetry had ceased, the actual altitude of ballast drop and subsequent altitude attained after ballast drop is not known. The altitudes shown on the time vs altitude curve above are estimates. The descent of the balloon to a lower altitude after sunset reversed the direction of the trajectory and the system began moving toward the west. At the following sunrise the balloon was found near the west coast of India. The termination timers were due to run out at approximately 7:00, but did not actually release the payload until 10:00. The timers evidently slowed to some extent during the night, because of extremely cold temperatures experienced in the absence of solar radiation. Impact occurred 180 miles west from the launch site at 10:42, and the payload was recovered.