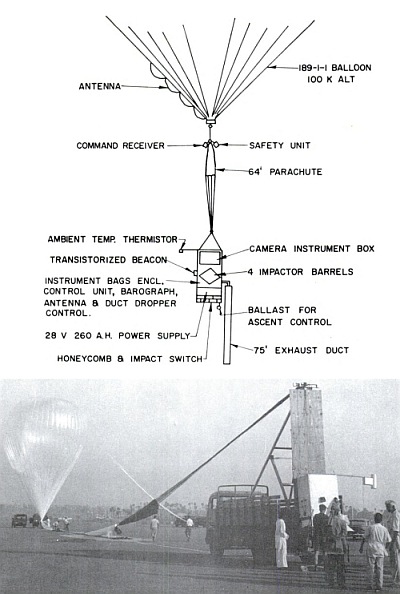 Balloon was launched on April 11, 1961 at 7:35 local time from Begumpet Airport, near Secunderabad using dynamic method. The system was ascending in a normal fashion when, at approximately 2000 ft, the ballast used to assure safe launch with low percentage of free lift was suddenly released. The flight continued to ascend and at approximately 3000 ft the payload was suddenly released from the balloon and descended to the ground by parachute. Impact occurred only a few hundred yards from the launch site, on the Indian Air Force Station parade ground.

The reason for payload release was apparently radio-command malfunction. The reason for this malfunction is not known except that the position in the flight train was hazardous for the unit at launch . The radio - command unit was positioned between the parachute and balloon and was therefore subjected to severe shocks at launch. The unit could not be repositioned on the gondola below the parachute because of the lack of adequate cabling required to reach to the top of the parachute from that position for payload release purposes.